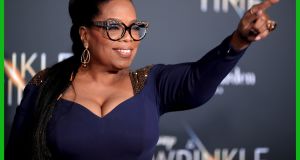 Oprah Winfrey will continue in her role as board member, adviser and spokeswoman for Weight Watchers. Photograph: Getty

Weight Watchers ralled Wednesday on news that Oprah Winfrey will not be selling any more of her stock in the company this year.

Ms Winfrey, who spurred a comeback at Weight Watchers International Inc when she bought a stake in the company in 2015, is cashing in on the turnaround.

Winfrey made $110 million this month by selling two million shares of the company, most of which came from exercising options, according to a regulatory filing. She also donated 361,000 shares to her charitable foundation, which sold them for $22.6 million.

The billionaire media mogul unloaded the shares to diversify her investment portfolio and make the donation, according to a statement from the company Tuesday. Winfrey won’t sell additional shares this year, Weight Watchers said.

The news didn’t faze investors. Weight Watchers shares, which had dropped the previous seven straight trading days, climbed as much as 7.8 percent to $62.99 on Wednesday. – Bloomberg