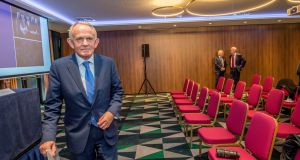 Leslie Buckley who stood down as INM chairman photographed during the INM egm. Photograph: Brenda Fitzsimons

The board of Independent News & Media (INM) is expected to meet in coming weeks to select a new chairman, after the formal resignation on Thursday of Leslie Buckley at an egm in Dublin’s Alex Hotel.

For his final act as chairman, Mr Buckley oversaw the meeting that was called last month to elect four new non-executive directors, to bring the board back into compliance with corporate governance guidelines.

Due to the adverse weather conditions, only a handful of shareholders were present. However, all four proposed new directors – Murdoch MacLennan, Seamus Taaffe, Fionnuala Duggan and John Bateson – were duly elected on the strength of votes cast in advance by shareholders.

Allan Marshall, who was due to step down from the board alongside Mr Buckley, was unable to make the meeting and was stuck in London due to weather.

Mr Buckley, who has decided to step down in the midst of an investigation of INM and his actions as chair by the Office of the Director of Corporate Enforcement (ODCE), said his 5½ years in the role had been “a challenge”. He also highlighted INM’s “financial turnaround” that took place on his watch.

Mr Buckley also acknowledged the controversy that has swirled about INM for the last 18 months, since The Irish Times revealed that he had fallen out with then chief executive Robert Pitt over a proposed deal to buy Newstalk from Denis O’Brien, whom Mr Buckley represented on the INM board.

This sparked a whistleblower complaint by Mr Pitt to the ODCE, which later uncovered evidence of a “potential data breach” at the company.

The ODCE investigation has widened to encompass the circumstances surrounding Mr Buckley’s retention of cybersecurity experts, who were given access to INM’s sensitive internal systems. The State watchdog has asked Mr Buckley who paid the bill for this, and why it happened.

Mr Buckley told the egm that “as a high profile media company... sometimes we too can become news”.

“Whilst I might not have always agreed [with the coverage of INM by other newspapers], I value a good exclusive and the hard questions that follow,” said Mr Buckley.

INM’s shares closed down in Dublin yesterday by just under 1 per cent. Trading was truncated as the market closed early due to the pending arrival of Storm Emma.

1 Bank leaked my loan request to family who tried to rip me off
2 Ryanair and Aer Lingus monitor impact of coronavirus on travel to Italy
3 Boris Johnson's new immigration regime will damage much more than industry
4 Exposed to coronavirus: How Irish business is coping with fallout
5 Billionaire Zara founder and German funds vie for prime Dublin offices
6 Mastercard to create 1,200 new jobs by expanding base in Dublin
7 Five ways to create a culture of innovation in the workplace
8 Beau Lotto: How to rewire our brains to spark innovation
9 Barclays scraps system monitoring how long staff spent at desks
10 Artomatix buyer revealed as Unity Technologies
Real news has value SUBSCRIBE