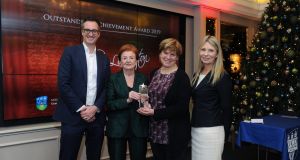 Two journalists from The Irish Times were honoured yesterday at the UCD Smurfit School Business Journalist Awards for 2019.

Business Affairs Correspondent Mark Paul won the economic commentator/business analyst award for his two submissions: Primark shows a consumer paradox, and After 15 years of marriage to Google, is it still as good for us as it is for them?

In addition, the Outstanding Achievement Award was presented to Irish Times columnist Karlin Lillington for her contribution to business journalism over three decades.

In 2014, the Courts of Justice of the European Union (ECJ) struck down an EU directive on data retention, based largely on her coverage of the issue in The Irish Times from 2005.

From her reporting, Digital Rights Ireland took a case in the Irish High Court in 2007, which was then referred by the High Court to the ECJ. It was a landmark case, and assertion by the ECJ of overreach by the EU when it comes to citizens’ rights.

Fiona Reddan of The Irish Times was shortlisted for the economic commentator/business analyst award.

The annual awards recognise excellence in business journalism - in print, broadcast and online formats - and were sponsored by Bank of Ireland and run in conjunction with the Business Journalists Association of Ireland.

Commenting on the awards, Prof Anthony Brabazon, the Dean of the UCD College of Business, said: “Now in its 13th year, the Business Journalist Awards remain an important initiative for UCD Smurfit School as we seek to acknowledge the very best of business journalism, work which enriches the public’s understanding of critical issues of the day and how they impact business and society.

“We would especially like to acknowledge the contributions of our Outstanding Achievement Award nominee Karlin Lillington. Her tenacious pursuit of data protection rights inevitably weaves into the world of business, ethics and society. We applaud her work with Digital Rights Ireland and Frontline Defenders as she fearlessly stands against online harm, hate speech and electoral interference. “

The independent panel of judges for the awards was chaired by Breege O’Donoghue, a senior executive for many years with retailer Penneys/Primark.

1 Player Wills site: Hines and APG to seek permission for 416 homes
2 Eir agrees to buy entire share capital of Emerald Tower
3 Developer O’Flynn calls for task force to deal with housing crisis
4 Pilita Clark: A lot of us are losing it in lockdown – but we really shouldn’t
5 Consumer spending fall may cut indirect tax revenues by up to €6.7bn
6 Pricewatch: Coronavirus has given us four categories of shopper
7 EU divisions laid bare by ‘frugal four’ Covid recovery proposal
8 Lobbyists Zoom in to get their message across to Ministers
9 ‘I’ve so many outgoings with family life . . . it puts manners on you’
10 Workplace bullying costs economy €239m per year
Real news has value SUBSCRIBE