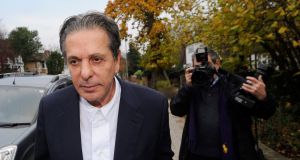 Charles Saatchi who, along with his brother Maurice, founded M&C Saatchi in 1995 after they were ousted from Saatchi & Saatchi. File photograph: EPA/Facundo Arrizabalaga/EPA

M&C Saatchi said co-founder Maurice Saatchi and House of Cards author Michael Dobbs would step down from the board, days after the British advertising agency issued its second profit warning in less than three months due to an accounting scandal.

The agency, founded in 1995 by brothers and advertising moguls Maurice and Charles Saatchi after they were ousted from Saatchi & Saatchi, also said non-executive directors Michael Peat and Lorna Tilbian had stepped down.

“We have accepted the decision of these directors to resign. We are determined to restore the operational performance and profitability of the business and are already implementing all of the recommendations set out in the PwC report,” chairman Jeremy Sinclair said in a statement, referring to an independent audit review.

Mr Sinclair said the company had started a process to reconstruct its board with new independent directors, who “will have a mandate to conduct a full review of all aspects of our governance”.

The original Saatchi business, led by the Saatchi brothers, made a name for itself with its “Labour isn’t working” campaign poster for Margaret Thatcher showing a queue of people snaking out from an unemployment office and disappearing into the distance.

M&C Saatchi, which has created ad campaigns for a number of Conservative elections including the “demon eyes” advertisements that ran in 1997 showing Tony Blair with glowing red eyes, said last week that it would restructure its UK operations. – Reuters