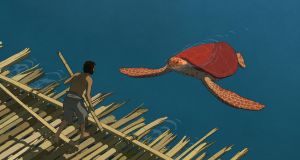 A scene from the animated film, The Red Turtle, a Sony Films production. The company has blamed the writedown on a faster-than-expected decline in the DVD and Blu-ray market.

Sony has warned it will take a ¥112.1 billion (€922 million) writedown on its film business, blaming a goodwill impairment charge that dates back to an acquisition of a Hollywood studio almost three decades ago.

Despite a grimmer outlook for one of its key entertainment arms, the Japanese group said on Monday it had no plans to sell its movie and television studio, stressing “the picture segment continues to be an important business of Sony”.

The studio has had a tough 12 months, with few movie hits to speak of, and the writedown warning comes just weeks after Sony revealed Michael Lynton is stepping down as chief executive of Sony Entertainment to become chairman of Snap, the owner of messaging app Snapchat.

The company blamed the writedown on a faster-than-expected decline in the DVD and Blu-ray market, and said the majority of the goodwill impairment charge arose from the acquisition of Columbia Pictures Entertainment in 1989.

Sony’s film business has been struggling during the past few years, although its weakness has been offset by the strong performance of its PlayStation business and robust demand for image sensors used in smartphone cameras.

Mr Lynton’s 13-year tenure at Sony was rocked in 2014 by a huge cyber attack, when thousands of emails were leaked on the internet. Sony replaced Amy Pascal with Tom Rothman as chairman of Sony Pictures in the wake of that incident.

Mr Lynton’s successor has not yet been announced and the Japanese group has said he will stay on for up to six months as co-chief executive, sharing responsibilities with Kazuo Hirai, Sony’s chief executive.

The writedown did not come as a complete surprise to investors, with Sony already having lowered the annual operating profit forecast for its film division by 24 per cent in November. Turnround efforts at the movie studio had not been going as smoothly as executives had initially hoped.

Sony took significant losses on the value of Columbia Pictures back in 1994 and company officials stressed this would be the last of any goodwill impairment charges related to the $3.4 billion acquisition.

Sony said it was still calculating the impact of the writedown on its third-quarter earnings, expected to be released on Thursday. The company also announced it was likely to book a profit of ¥37 billion in the fourth quarter through the sale of shares in M3, a medical web portal, to Goldman Sachs.

For the fiscal year ending in March, the group is anticipating a 59 per cent decline in net profit to ¥60 billion, after a series of earthquakes in the southern city of Kumamoto last April disrupted production of its image sensors, while losses resulted from the sale of its battery business. – Copyright The Financial Times Limited 2017

6 Moving to a right-sized home: What are your options?