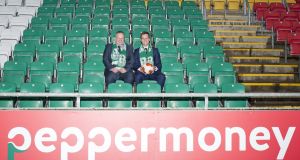 Ireland’s newest mortgage lender Pepper Money has agreed a two-year sponsorship deal with Shamrock Rovers that could be worth up to €400,000 for the Tallaght-based soccer club.

Australian-owned Pepper has been a sponsor of Rovers for the past four years but this deal will see its newly-launched consumer brand, Pepper Money, feature on the kits of Shamrock Rovers’s various teams in the League of Ireland.

Under the terms of the sponsorship, Pepper Money’s branding will feature on signage at Tallaght Stadium as well as on team kits from the start of the season on February 24th. The deal coincides with Shamrock Rovers’s opening of its new academy facilities at the Roadstone Group’s sports complex in Clondalkin, which it hopes will provide a conveyor belt of young talent to its first team.

Pepper Ireland chief executive Paul Doddrell said the sponsorship with Shamrock Rovers had helped the company grow awareness of its brand over the past five years.

“Shamrock Rovers has provided a great platform for us to build our brand over recent years and this reach will become even more important as we aim to grow our lending business in Ireland, dealing directly with Irish consumers,” he said.

“Our partnership with Pepper has played a significant part in allowing the club realise its ambitions on the pitch as well as developing facilities such as the academy,” he said.

“We’re delighted to extend our relationship for at least two more years and it coincides with the next phase of the Pepper’s journey into lending in the Irish marketplace.”

Pepper set up here in 2012 as an asset servicer and currently employs about 400 staff in Dublin and Shannon. It services more than 50,000 mortgage accounts, mostly for third parties, and has about €19 billion in assets under management.

Founded in 2001, Pepper Group is listed on the Australian Stock Exchange and has assets under management of about €37 billion.