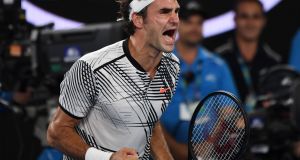 Discovery-owned Eurosport is spending more on rights, broadcasting events such as the recent Australian Open - the men’s title of which was won by Roger Federer.

Discovery Communications, the company backed by Irish-American billionaire John Malone, struck a last-minute deal to keep Eurosport and the rest of its dozen-strong portfolio of channels from “going dark” on the Sky platform.

All channels will continue to be available to Sky customers across Europe, as well as on Sky’s Now TV service in the UK.

Discovery had threatened to remove the channels in a pricing dispute with Sky over its carriage deal with the pay-TV company.

Shares of Discovery rose as much as 2.5 per cent after the announcement, while Sky, which is in the process of being acquired by Rupert Murdoch’s 21st Century Fox, was little changed.

“People were worried about Discovery losing its biggest contract in the UK,” said Ian Whittaker, a media analyst at Liberum Capital in London.

“They would have lost carriage fees and their advertisers would have had less reach.”

“We have reached a new agreement that guarantees Sky’s customers access to Discovery’s wide range of channels and programs for years to come,” said Susanna Dinnage, managing director of Discovery Networks UK in a statement.

“Our fans’ voices were heard loud and clear.”

While the two companies settled their dispute, they still couldn’t agree on who was forced to compromise. In a statement, Sky said the deal “has been concluded on the right terms after Discovery accepted the proposal we gave them over a week ago”.

A Discovery spokesman responded by saying the agreement was “meaningfully better” than the former one as well as Sky’s proposal.

“Furthermore, our new arrangement enables us to control our destiny in more ways, with even more opportunities to invest and launch channels and consumer services,” Discovery said in a statement.

Sky earlier this week said Discovery had been seeking close to £1 billion for their portfolio of channels.

Disputes between TV networks and distributors are common, and they occasionally reach a stalemate as both sides try to negotiate better deals.

Discovery, on a growth spurt in Europe, has been demanding more money in fees from distributors such as Sky to counter a loss of subscribers and stalled advertising growth in the US.

Part of Discovery’s push is an expanding investment in Eurosport, a home to darts tournaments and other less-popular contests that the company is trying to transform into a significant sports destination. Early next year, Eurosport will carry the 2018 Winter Olympics, the first of four Olympic games for which it has acquired European TV rights.

While Discovery is a supplier to Sky, its networks also compete with Fox networks including Fox UK and National Geographic Channel.

The pending Sky-Fox deal, which would unite Murdoch’s television business across two continents, has added some intrigue to the negotiations, as Sky belittled Discovery’s portfolio of linear-only channels, saying that many of them were “in decline”.