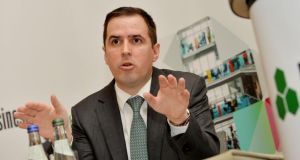 The Sunday Independent writes that Apple’s “decision to cancel” the construction of a data centre costing €850 million in Athenry, Co Galway, has been described by the chief executive of IDA Ireland, Martin Shanahan, as “understandable”. The paper, along with the Sunday Times, reports that Taoiseach Leo Varadkar has confirmed that data centres will in future be considered strategic infrastructure for planning purposes.

Speaking on the RTÉ Radio 1 programme This Week, however, Mr Shanahan said he did not think this was the final word on the Athenry facility and Apple may consider the location as part of its future plans. He said the IDA welcomed moves to regard data centres as part of strategic infrastructure. He said it reduced the uncertainty for companies on the timeline for a planning outcome will be of assistance.

The Central Bank claimed there were “zero” examples of bank customers in arrears being wrongly switched from tracker mortgages when asked about the issue by a TD three years ago. The Sunday Independent reports that Fine Gael TD Jim Daly wrote to the regulator and met senior officials, but was told that there was no evidence to support his concerns.

Bank of Ireland is to widen the scope of its tracker mortgage examination to include up to 2,000 home loans held by current and former staff. The Sunday Times reports the bank has also assigned 200 additional staff to work full time on the examination. The newspaper also reports that Permanent TSB is expanding its debt forgiveness initiative for buy-to-let investors after a successful pilot scheme. The scheme writes off mortgage shortfalls provided borrowers agree to surrender their properties. These are then managed by Pepper Finance on behalf of the PTSB until they can be sold.

A Dubai finance group is advancing up to €35 million to resurrect Ulick and Des McEvaddy’s proposed Terminal 3 project at Dublin Airport. The Sunday Times reports that Tricap Investments has refinanced loans secured on three tracts of land at the airport, some previously held in the National Asset Management Agency.

A 70-acre site in Cork city has been earmarked for the development of a €1 billion “Irish financial services centre for shipping”, according to the Sunday Business Post. The newspaper quotes the head of the project as saying it would be “the biggest urban regeneration project in Ireland”. It reports the aim is to mirror Ireland’s success as a global headquarters for multibillion-euro international aviation leasing giants.

In a similar vein, the establishment of a major food industry hub in the Boyne Valley region is set to create 2,500 jobs by 2025, according to the Sunday Independent, reporting on the ambitions of a Co Meath food initiative. The Boyne Valley Food Innovation District has the backing of Bord Bia chairman Michael Carey and former Largo Foods director Ray Coyle.

The Sunday Business Post carries a 12,500-word report by Tom Lyons that traces the sale of Siteserv to businessman Denis O’Brien. It tracks the bidding process and the parties involved, including emails purporting to show the frustrations and complaints made by underbidders for the support services group.

Advocating the introduction of universal quality childcare, economist Stephen Kinsella, in the Sunday Business Post, says it would enhance affordability, created employment, improve gender equality and improve child development. Pointing out that Ireland spends more subsidising the production of sheep and greyhounds than helping families afford childcare, he argues that Irish families spend disproportionately more of their disposable income on childcare than families in our European Union counterparts do. “Childcare costs are the main reason we have one of the lowest labour force participation rates in the world,” he wrote.