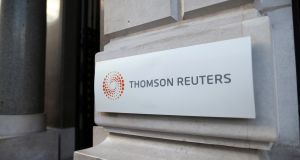 Thomson Reuters on Wednesday reported revenue below investor expectations as financial services clients in Europe and Britain held off on signing deals due to regulatory and political uncertainty.

“We aren’t satisfied with our top-line growth and we are addressing these issues by controlling everything that is within our control,” chief executive Jim Smith told analysts on an earnings call.

Although earnings-per-share beat estimates, in part due to cost controls, the revenue miss pushed shares down 6.5 per cent to $43.81 on the New York Stock Exchange.

Thomson Reuters still expects year-over-year growth in its financial business in 2017 and 2018.