Death and Nightingales: will State miss out on future Irish TV success? 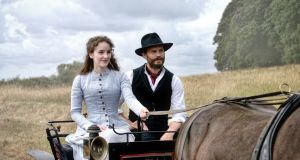 Fields of gold: Irish actors Ann Skelly and Jamie Dornan in ‘Death and Nightingales’, a co-production between the BBC and RTÉ

Add it to the list of television programmes you really should watch. Period drama Death and Nightingales, a three-part adaptation of the Eugene McCabe novel set in Co Fermanagh, begins on RTÉ One next Monday night and BBC Two the following Wednesday. Although commissioned by the BBC, it also has production funding from RTÉ as well as an obviously Irish theme.

In the booming international content market, Death and Nightingales has an advantage that is too often forgotten: it is in the English language. According to RTÉ’s director of co-production and acquisitions Dermot Horan, this is one reason why the series enjoyed a high level of prominence at last month’s Mipcom global television marketplace in Cannes.

But at Friday’s Mediacon summit – in the slightly less glamorous location of the Dublin docklands – there was a feeling that the Irish industry is not as well placed or resourced as it needs to be to take advantage of the growing worldwide demand for scripted content.

The opportunity is quite big, but I don’t think we’re as organised as we could be

“If you want to get co-production funding, the first thing they ask you is, are you being supported by your local industry,” said Horan. RTÉ, as it stands, is too often not in the financial position to offer that support. Screen Ireland (previously known as the Irish Film Board) at least has the promise of more Government funding coming its way: €200 million over a 10-year period would certainly help extend the kind of investment it can make in exportable Irish creativity.

For John Gleeson, head of media and entertainment at Grant Thornton, Ireland possesses strong “soft power” on screen and it would be remiss of the State not to capitalise on it. For the moment, however, it is falling short.

“The opportunity is quite big, but I don’t think we’re as organised as we could be,” he said, adding that “the Government and the Department of Finance need to be educated on the bigger picture”.

On this, it is hard to disagree. Show the sector the money and it will show what it can do in return.