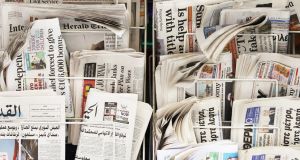 The traditional printed press has had a fraught relationship with digital giants like Google and Facebook who have used their material without payment.

The legislation, the Copyright Directive, which passed through the European Parliament in September – 438 in favour to 226 against – is now tied up in tripartite “reconciliation” discussions about its final form with the European Commission and member states in the Council of Ministers.

Each side in the three-way process is defending its version of the controversial law which was the subject of a huge lobbying campaign by the digital companies, news and music publishers, and online rights campaigners.

The traditional printed press has had a fraught relationship with digital giants such as Google and Facebook who have used their material without payment while increasingly hoovering up the advertising revenue they depend on to survive. The publishers, in pressing for payment for copyrighted material, face the dilemma, however, that they need the exposure online and so are unwilling simply to deny the digital platforms access to their work.

The European Parliament’s version of the bill sought to facilitate content producers such as newspapers or musicians in forcing online platforms to pay licensing agreements for their use of material.

At issue now are arguments about how much of that material can be exempted from a payment requirement – notably “snippets and hyperlinks” – with the platforms insisting that overzealous legislators have conceded too much to publishers.

Publishers fear that definitions of “insubstantiality”, language defining exemptions promoted by member states in the trilogue, would tie publishers and online companies up in endless litigation. One proposed definition would require payment for snippets of articles only if they can be shown to be an expression of the intellectual creation of an author.

Publishers also insist that hyperlinks are specifically excluded from the parliament legislation and they strongly dispute the platforms’ use of the expression “link tax”. Sharing facts are also not a problem, the MEP who led on the legislation for the parliament, insists.

But Google is threatening to close down its Google News operation if the measures are approved – it did so in Spain in response to a similar law.

It says that a payments regime makes what is a free service unviable for the company. In an open letter to EU justice ministers the publishers’ organisation, News Media Europe, asks for their support in the three-way discussions and warns: “If you want a sustainable future for our professional, independent press; if you want quality, fact-checked content; if you want publishers to be able to continue to invest in professional journalism; now is the time to act and support the ‘publisher’s neighbouring right’ (Article 11) as widely adopted on September 12th in the European Parliament’s text.

“It is an essential step for the future diversity and pluralism of Europe’s press that underpins our democracy.”

1 Fianna Fáil may have just pressed the pause button on the property market
2 UK to prioritise EU trade deal over one with United States
3 Who are Ireland’s 17 billionaires?
4 Dunnes premature in challenging Point Village resolution move, Supreme Court finds
5 My father in a nursing home wants to gift me his house
6 Belfast regeneration project worth £500m gets green light
7 State ranked highly for attracting skilled workers but low on gender issues
8 Are there annual limits on inheritances or gifts to a child?
9 Saudi prince’s WhatsApp account ‘directly involved’ in Bezos hack
10 European investor acquires Harcourt Road offices for €55m
Real news has value SUBSCRIBE