Pitt, Buckley, and O’Brien: the INM row that won’t go away

After the AGM theatrics, focus now shifts to the ODCE’s investigation 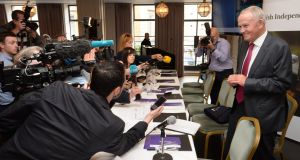 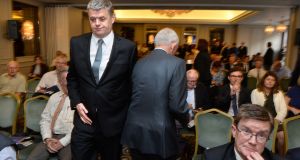 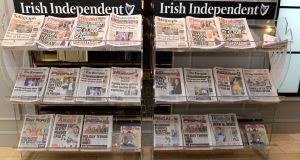 On Wednesday morning, three hours before he infuriated Leslie Buckley by voting against his re-election as chairman of the board, Independent News and Media (INM) chief executive, Robert Pitt, swung his bat in another direction.

Pitt was talking about INM’s interim results to stockbroking analysts, who demanded to know why its rate of growth for digital advertising revenues had slowed so considerably, to an underwhelming 6.3 per cent.

“We’re fighting against Google and Facebook, ” Pitt replied. “It’s tough when you have two such huge companies as competitors. They take our content and they share it for free across their platforms. It’s a very uneven playing field.”

This is very similar to a point Denis O’Brien made last month at a business event in the Bahamas. It even echoed O’Brien’s choice of language.

Pitt is an unsentimental, even chippy, sort of corporate executive who isn’t afraid to do the down-and-dirty work required to grind out profitability in the cut-throat world of newspaper publishing .

It’s funny – if he wasn’t embroiled in a such a battle with O’Brien’s representative in the chair of INM, he’d be the perfect sort of workhorse executive, with added guile, that you would expect to find flourishing in the billionaire’s stable.

To date, the row at INM has focused on the actions of Pitt and Buckley. But the spectre of O’Brien has never been all that far from the story.

It was, after all, O’Brien who was selling Newstalk, the radio station over which the row between Buckley and Pitt blew up in a proposed buyout by INM.

According to an account by Pitt – delivered at an Oireachtas committee hearing in February – it was also O’Brien’s company who came up with the idea of trying to flog Newstalk to INM, where he is the main shareholder.

The row blew up over the price Newstalk’s camp was seeking, and with which O’Brien, as the seller, was presumably on board. Pitt clearly rejected the valuation and was not prepared to meet it, or anything close.

“There were different opinions as to the value that could be attributed to an asset like that,” said Pitt in February. “We came to the conclusion that we could not reach agreement.”

The chief executive later made a whistleblower complaint to the State’s corporate watchdog about the stance of Buckley, who. let’s not forget, was appointed to the INM board as a representive of the interests of O’Brien.

The complaint, to the Office of the Director of Corporate Enforcement, means it now becomes the latest part of the State’s regulatory architecture to find itself nosing through the affairs of companies linked to O’Brien.

No evidence has emerged to suggest O’Brien has done anything at all in this matter that warrants investigating. But the whole palaver must be intensely annoying for him, and an unwelcome distraction.

The company confirmed that the ODCE investigation, which began with a demand for records sometime after December, is ongoing.

INM also effectively confirmed that it has since received further demands from the ODCE: “The company continues to comply with requirements from the ODCE and is taking all necessary steps to meet the ODCE’s requests.”

If the ODCE is still making “requests”, it indicates that the regulator is still engaged in the probe. It is in nobody’s interests, however, for it to drag on.

The ODCE’s next steps will be crucial for INM, especially given that the external review of the affair commissioned by INM came back, it is understood, relatively inconclusive.

Back at the AGM on Wednesday, the cabaret continued.

A shareholder asked Buckley about swirling rumours that O’Brien might buy the 70 per cent of INM he doesn’t own, and take the whole thing private.

“I’ve heard no word of that at all,” replied Buckley, who said he had only read about it in newspapers.

A 70 per cent slice of the market capitalisation of INM is worth about €106 million. Investors would need to be swayed with some sort of premium, though not a huge one given the difficulties facing the sector – and O’Brien could then do as he pleased with the €95 million sitting on INM’s balance sheet.

But could he get a deal past regulators, and ultimately, the Government? Ministers have the final say on media mergers.

O’Brien’s presence as the individual investor with by far the most influence over the Irish media landscape is often a source of public and political hand-wringing. Any move to take INM private would give him even more influence.

The most likely scenario remains the maintenance of the status quo, in terms of INM’s ownership.

There were other questions at the AGM, about the potential resumption of dividends and the strategy towards acquisitions. But the juice of the meeting was the standoff between Pitt and Buckley.

Giles Kerr, an INM shareholder and a retired former corporate governance consultant, asked Buckley a number of pointed questions about the affair.

He asked for confirmation that there be no “retaliation” against Pitt for making his whistleblower complaint, and queried Buckley over the state of his relationship with the chief executive, the maintenance of which Kerr correctly identified as being core to the duties of a chairman.

Buckley deftly sidestepped that one, but he did allude to the softly-softly approach that major companies must legally adopt when dealing with complaints made under whistelblowing rules.

“If someone makes a protected disclosure it needs to be handled in the proper way, with a proper legal framework,” Buckley said. “That’s exactly how it is being done.”

Speaking to The Irish Times after the AGM, Kerr said he wants “to see that Pitt does not suffer” for raising corporate governance issues at INM.

“This is an extraordinary situation. But it says right there in INM’s annual report that the company cannot retaliate against whistleblowers,” he said.

In a fresh addition to page 36 of the latest INM annual report, which was the cause of some mirth externally given Pitt and Preston’s actions, it said employees are “encouraged to raise a concern if any of our activities are being undertaken in a manner that may not be legal or ethical”.

“Our internal policies make clear that retaliation against any employee who raises a concern is prohibited,” the INM report continues.

Kerr said he “didn’t get a satisfactory response” to his question from Buckley.

“They’re hiding behind the ODCE report, although perhaps it is sensible to see what comes out of that.”

He said he was glad that Pitt was prepared to speak up on governance issues at board level: “We don’t want groupthink on the board, although we also need it to be able to function. I hope this is resolved amicably.”

At this juncture, there seems little hope of that.

Regardless of the merits or otherwise of Pitt’s complaints about Buckley – that is for the ODCE to decide upon – it appears that the chief executive has received little succour to date from the rest of the board.

He initially went with his complaint last year to the then-senior independent director, Jerome Kennedy, who did not stand for re-election this week. A sub-commitee appointed by Kennedy found “no issue of concern”.

After Kennedy’s departure this week, there are six directors on the board apart from Pitt and Buckley. Two of those, Triona Mullane and Paul Connolly, are not considered independent because of their financial links to O’Brien.

Two more, David Harrison and Allan Marshall, are also not considered independent because of links to, respectively, Dermot Desmond and INM itself.

That leaves just two independent directors on the board: Terry Buckley, who knows O’Brien through the Special Olympics movement but is defined as independent by the board; and Len O’Hagan, who used to have close links to Tony O’Reilly.

INM has engaged consultants to help it find the three independent directors it needs to meet corporate governance rules.

A shareholder asked Buckley about this process, quoting a recent piece in The Irish Times that mused an INM directorship mightn’t be all that appealing, given the current boardroom wrangling. Buckley saw the funny side of that question, at least. If Pitt did, he hid it well.

INM is Ireland’s largest newspaper publisher, and an important employer with 800 staff. But for one of the best-known entities in corporate Ireland, it has a tendency to allow itself to become embroiled in drama.

It is in danger of becoming the Newcastle United of the Irish Stock Exchange: run by an unhappy manager who has fallen out with the powers-that-be, and emanating a steady stream of negative, damaging headlines.

Pitt remains in his position at INM, for now, although it cannot be a comfortable spot to occupy, given the scrutiny and the pressure. And the apparent lack of allies.

His favourite film, according to a profile of him last year, is the Empire Strikes Back. Surely, he will be hoping, that is not a portent.