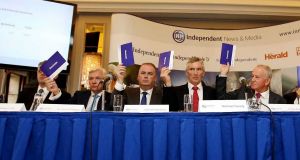 Dutch hedge fund manager Bram Cornelisse is stake-building in Independent News & Media (INM) as it continues to deal with the fallout from the extraordinary boardroom bust-up over corporate governance.

Farringdon Capital, which is owned by former Merrill Lynch executive Mr Cornelisse, has boosted its share to almost 6.5 per cent of the publisher, up from 5.2 per cent, according to company filings.

The Dutch fund is now the third-largest investor bloc in INM, which posted interim results and held its agm in Dublin yesterday.

The biggest shareholders after Farringdon remain Denis O’Brien, who owns almost 30 per cent, and Dermot Desmond, with close to 15 per cent.

Analysts are now warning that the share price is being held back by the bitter boardroom split over an aborted deal for Mr O’Brien’s Newstalk, which led the chief executive, Robert Pitt, to make a whistleblower complaint about the chairman, Leslie Buckley, who is also Mr O’Brien’s representative on INM’s board.

Darren McKinley of Merrion Stockbrokers said INM was being “plagued” by the row: “We feel senior management and the board need to seriously address these concerns in order for the true value of INM to be recognised.”

Rachel Fox, of Goodbody Stockbrokers, said the boardroom row had got “into shareholders heads” and was affecting the share price.

In an unprecedented public display of boardroom disunity at the agm of an Irish listed company, Mr Pitt yesterday refused to back the re-election of Mr Buckley as director. He abstained in a show of hands at the meeting, which was held in the Westbury Hotel in Dublin.

In response to questions from shareholders, Mr Buckley said the board was working “night and day” to deal with the issues at the heart of the row, which was sparked by Mr Pitt’s refusal to meet Mr O’Brien’s asking price for Newstalk.

The matter is being investigated by the State’s corporate watchdog, the Office of the Director of Corporate Enforcement.

“If someone makes a protected disclosure, it needs to be handled in the proper way, with a proper legal framework. That is exactly how it is being done,” said Mr Buckley.

A shareholder, Giles Kerr, asked that INM ensure that there was “no retaliation” against Mr Pitt for making his complaint.

Mr Buckley declined to comment further on the row after the agm, while Mr Pitt would not comment either.

Senior independent director Jerome Kennedy, who first fielded Mr Pitt’s complaint about Mr Buckley last year before the ODCE was informed, did not stand for re-election to INM’s board.

Shareholders who asked why he had decided to no longer be an INM director were told by Mr Kennedy that he had simply reviewed his portfolio of directorships and there was nothing “untoward”.

He called for a full refresh of the board, which currently does not meet the guidelines for independence to which listed companies are expected to adhere.

Another shareholder said the board was too “unhappy” and joked that they should “appoint a clown”.

Mr Buckley replied that he was “not miserable”.

Earlier, INM released results for the first six months which showed revenue had fallen 8.4 per cent and pretax profit was down almost 20 per cent. The company has cash of almost €96 million.

Mr Buckley complained that the Irish regulatory environment for media companies was holding back the business, which wants to mop up print assets in Ireland.

1 Coronavirus: Construction sector most significant part of new shutdown
2 Remote working doesn’t suit everyone, and it exposes woolly leadership
3 Retail landlords worried rents will dry up during Covid-19 crisis
4 British exceptionalism backfires in style as Johnson tests positive for coronavirus
5 Rivian takes on Tesla with big batteries and subtler approach
6 Can husband keep savings and half the house in divorce?
7 Will Covid-19 force Primark to rethink decision not to sell online?
8 Wetherspoon’s panto-villain chairman may have the last laugh
9 AIB shelves plan for maintenance and transactions fees
10 How to . . . move (almost) everything to your new phone
Real news has value SUBSCRIBE