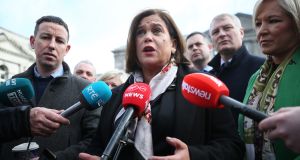 Sinn Féin leader Mary Lou McDonald. To support production companies “in places like Limerick, Galway and Waterford”, the party says it will create a fund that will rise to as much as €80 million a year. Photograph: Nick Bradshaw

With an interim phase of denial, anger and bargaining to muddle through before the Irish government formation game begins in earnest, there’s time to consider an issue that’s unlikely to get much mention at the negotiating table, but nevertheless seems awkwardly pertinent – not least given Downing Street’s grim and incredible campaign to “whack” the BBC.

Manifesto stances on the Irish media sector tend to be expressed in language that seems equally supportive. They almost certainly wouldn’t be in reality.

Before the election was called, Fine Gael had been talking in vague terms about setting up a commission on public-service broadcasting. In its manifesto, it suggests this would set a new direction for the whole concept “in light of international experience and future trends”.

But which international experiences does it have in mind? Does it want to help the Irish media sector evolve to cope with anticipated future trends, or might its ultimate vision be nearing that of would-be saboteur Boris Johnson?

We may never know. Two other manifesto lines from Fine Gael leap out for different reasons. One is the promise to amend legislation allowing for a cut in the broadcasting levy paid by some radio stations and the creation of bursaries for journalists employed by local or community radio stations. Sounds good, doesn’t it? The problem is this has been sounding good now for three years, when the promise was first made.

Less stale – indeed on the surprising side – is its proposal to move away from self-regulation in advertising and “require the Competition and Consumer Protection Commission to take a more active enforcement role”.

Clamping down on misleading political ads? Holding Facebook and other tech platforms responsible for the spread of fake news? Not quite. The real burning issue is apparently the fluctuating levels of transparency on the commercial relationships between “media influencers” and brands.

The media bit of the Sinn Féin manifesto, by contrast, went straight to an altogether different jugular. “Without public broadcasting, we will be left with billionaire media moguls pushing their own agenda,” it begins.

One of Sinn Féin’s three listed priorities for the media is legislation to “prohibit the blacklisting of journalists”, a reference to the ongoing ban on Irish Times journalists appearing on radio stations owned by billionaire Denis O’Brien and the temporary one that was in place against employees of business media outlet The Currency.

In practice, it’s hard to see how the behaviour of Communicorp could be meaningfully legislated away in this fashion, though the broader manner in which voices can be silenced or sidelined in Irish media is clearly one that makes many uncomfortable.

The party’s other media priorities are sustainable funding for public-service broadcasting – though at the same time it says RTÉ needs reform, especially on “pay at the top” and managerial structures – and a plan to promote independent media production “as a start-up industry”, with a new line of funding from central Government.

To support production companies “in places like Limerick, Galway and Waterford”, Sinn Féin says it will create a fund that will rise to as much as €80 million a year, or roughly twice what RTÉ currently spends and is obligated to spend on independent commissions.

Out of all the media measures lurking in party manifestos, this appears to be the one with the biggest up-front cost, but then Sinn Féin is hardly alone in arguing that a little nudge of investment could prompt a much higher economic dividend from the sector than is currently being collected.

Fianna Fáil, which if memory serves was tipped as Sinn Féin’s most likely coalition partner for at least half a day last week, is the party that gets the mistiest in its manifesto about the media’s role in safeguarding democracy.

It also highlights special journalism bursaries, plus a news media fund to help “traditional” media outlets cope with the decline in advertising and circulation revenues.

Such a fund had been mooted by its former communications spokesman Timmy Dooley (who lost his seat in the recent election), though when he talked about in 2018, it was in the order of €30 million a year – by manifesto time, it had shrunk to a more modest €15 million.

Fianna Fáil is the only “big” party to explicitly say it will introduce a new household broadcasting charge to replace the television licence fee, though it shares common ground here with Labour, which succinctly proposes “an alternative to the TV licence system”.

That wording is open to interpretation, but given Labour’s track record on half-pushing the idea to near-implementation, the “alternative” would likely resemble a household charge, rather than an optional subscription fee, which is the modern-sounding yet reactionary route by which Johnson and his friends now threaten to gut the BBC.

Which of these bullet points will find their way to a programme for government drawn up this side of Christmas? The smart money would be on none of them.

But a shout-out, finally, to the coalition-eager Green Party, which sensibly boiled its policy on broadcasting down to a desire to implement the recommendations of the Oireachtas communications committee on the funding of public service broadcasting (which Eamon Ryan sat on).

This was followed by a pledge to continue Irish engagement with the erstwhile Facebook interrogators known as the International Grand Committee on Disinformation and Fake News (which Ryan also sat on), giving the impression that the Green Party leader would prefer it if his time wasn’t completely wasted.

This being politics, it seems rather optimistic of him.