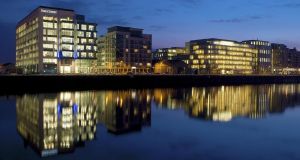 Financial services firm State Street says it will allow more than two-thirds of its 2,000 employees in Ireland work from home in regional locations

Blackstone Real Estate is facing losses of about €211 million on its investment in the Blanchardstown shopping centre and retail parks, according to the Sunday Times. The paper reports on a proposed deal for Goldman Sachs to take control of the centre by extinguishing the debt of a Luxembourg-registered entity connected to Blackstone that accounts show had injected €146 million in equity and advanced loans of €64 million to the centre.

KBC will this week introduce a “use it or lose” six month rule, within which mortgage borrowers who want an exemption from Central Bank borrowing limits must draw down their loans. The Sunday Times quotes brokers who say the rule is being introduced to stop some borrowers “sitting on exemptions that are never used”, thus eating up the bank’s quotas of exemptions. The Central Bank issued derogations to its borrowing rules for about 16 per cent of mortgage in the first ten months of the year.

The Sunday Independent reports that Immedis, a payroll technology company in the stable of Taxback founder Terry Clune, has secured an investment agreement with a US fund that the paper claims values Immedis at €500 million, triple what it was 18 months ago. US fund Lead Edge Capital is investing $50 million for its share, although it is not confirmed what slice of the Irish company it is picking up.

Britvic, which owns the Ballygowan spring water brand, says it is “examining strategic options” for its Counterpoint wholesaler supplier of beverages to Irish pubs, the Sunday Independent reports. Britvic told analysts that the Irish unit is a “margin drag” and confirmed to the paper that it is “challenged” and a review has already begun.

Financial services firm State Street says it will allow more than two-thirds of its 2,000 employees in Ireland work from home in regional locations, scaling back the number of staff who are expected to be based in its Dublin docklands headquarters. The company told the Sunday Independent that it will be leasing less office space in Dublin by the middle of next year.

The Sunday Business Post reports on the ongoing inquiry into the Grenfell Tower fire disaster and allegations that Irish stock market-listed insulation supplier Kingspan lobbied UK officials on fire safety regulations. The paper reports that Kingspan has yet to provide its defence to the allegations.

The Post also says a consortium led by Patrick McCormack, the former managing director of the Sam McCauley pharmacy chain, is acquiring the Cara pharmacy chain set up by Dragons Den television investor, Ramona McNicholas, and her husband. The group went into examinership in September following a High Court application by Elm Corporate Credit a secured creditor that was owed about €14 million.