Mastercard to create 1,200 new jobs by expanding base in Dublin 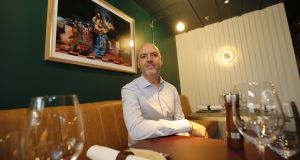 Chef Dylan McGrath pictured at his Shelbourne Social restaurant in Dublin 4. The Sunday Times has reported that the Mercantile pub group is in talks about investing in McGrath’s businesses. Photograph: Nick Bradshaw for The Irish Times

Credit card giant Mastercard will announce plans on Monday to more than treble its Irish workforce to 1,700, The Sunday Times reported.

The newspaper said that Mastercard was due to confirm plans to lease three office blocks in Leopardstown, Dublin from businessman Cyril McGuire and pledge to create more than 1,200 new jobs here. Mastercard already employs 500 workers at an Irish office opened in 2008.

Taoiseach Leo Varadkar and some of the credit card company’s executives will announce the plans. The buildings that Mastercard is leasing will ultimately have space for 2,500 workers, the newspaper noted.

It will be the first major multinational jobs announcement since the general election on February 8th and one of the biggest in recent years.

Whelan’s and Cafe en Seine owner Mercantile Group is eyeing a deal with celebrity chef Dylan McGrath, according to The Sunday Times. The pub group, owned by US-based Irish builder Maurice Regan, has held talks about investing in McGrath’s businesses.

Mercantile owns eight pubs in Dublin city centre, while the chef, along with partners Vinny and Gerard Melinn, runs six restaurants in the capital, including Fade Street Social.

The Sunday Times said it was understood that that talks between the two groups focused on investing in some or all of McGrath’s eateries.

McGrath has appeared on RTÉ shows Masterchef Ireland and Guerrilla Gourmet. He rose to prominence with Mint Restaurant in Ranelagh on Dublin’s southside which earned a Michelin Star.

Leinster rugby stars Dan Leavy and Adam Byrne are among backers that have pumped €1.3 million into sports science start-up Output Sports, according to The Business Post.

The UCD spin out has created a motion sensor that measures athletic performance.New filings in the Companies’ Registration Office show that that Output Sports recently raised €1.31 million from new backers including venture capital firms Atlantic Bridge and Elkstone Partners, and the two rugby players.

Fear of leaks has prompted one Irish law firm to ban staff from working in the same room as Alexa and other smart speakers.

The Business Post reported that Julie Brennan, managing director of the Institute of Legal Research and Standards, said that an unnamed Irish solicitors’ firm bans staff from using rooms with smart speakers when they work from home.

Ms Brennan said that there appeared to be concerns about the potential for speakers to leak sensitive information.

An Post says that parcels are continuing to arrive from China despite the Coronavirus outbreak, the Sunday Independent reported.

Deliveries from Chinese websites such as Alibaba.com and Wish. com continue to arrive from the country even though air mail from there has been suspended, the newspaper reported.

An Post told the Sunday Independent that parcel deliveries last month were 32 per cent up on January 2019. The State company next month intends installing an automated system in its Dublin mail centre that wil handle 70,000 parcels a-day that were previously dealt with manually.

The company, which is stepping up efforts to move from managing the country’s peat bogs to other businesses, said last week that it intended to apply for planning permission to build a wind-powered electricity plant at Derrinlough in the midlands county.

The Sunday Independent quoted sources which valued the investment at €100 million. The wind farm, built on cut-away bog, will have 21 individual turbines with blades up to 185m long.

Bord na Móna plans to invest €1.5 billion on developing renewable energy projects that the company estimates will create between 100 and 120 jobs.