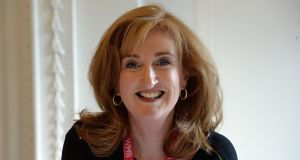 Lucy Gaffney, chairwoman of Communicorp Group, said it ‘did not feel it incumbent on our radio stations to promote a brand new, niche, digital competitor’. Photograph: Cyril Byrne

Communicorp Group has said it “did not feel it incumbent” on its radio stations to allow journalists from The Currency website on air as contributors, and was “surprised” Minister for Communications Richard Bruton wrote to the broadcasting regulator criticising the decision.

Shortly after The Currency was launched by Tom Lyons and Ian Kehoe in late September, Communicorp staff in radio stations such as Newstalk and Today FM were instructed journalists from the new digital publication were prohibited from appearing as contributors on air.

At the time the radio group said the decision was taken as The Currency was a competitor platform. Following the effective ban, Mr Bruton wrote to the Broadcasting Authority of Ireland to state that the decision “appears to be antithetical to the concept of a free and open press”.

Communicorp, which is owned by businessman Denis O’Brien, also includes stations such as 98FM, Spin 1038 and Spin South West.

In a December 10th letter to Mr Bruton, Lucy Gaffney, chairwoman of Communicorp Group, said she was “surprised” that the Minister “chose to communicate with the regulator and not engage in any communication with us directly”.

Ms Gaffney said the group “did not feel it incumbent on our radio stations to promote a brand new, niche, digital competitor”. The letter was released to The Irish Times under the Freedom of Information act.

The background to the decision was “an increasingly competitive and inequitable regulatory environment” where “unregulated digital media has caused irrevocable changes in the advertising market”, she said.

In relation to the ban on The Currency journalists, Ms Gaffney said “since our initial stance was made, we have re-evaluated the potential threat this business poses, and last week informed our programming teams that they can re-engage with The Currency”.

However, since the ban was lifted Mr Kehoe said journalists at the publication would not appear on Communicorp stations while a similar ban on Irish Times journalists remained in place.

In late 2017 the radio group instructed its staff that no journalists from The Irish Times should appear on its programmes, following a column by Fintan O’Toole which said Newstalk was “systematically sexist”. The effective ban remains in place to date.

The letter to Mr Bruton from Ms Gaffney also said she was “surprised that you have been unable to make time available to facilitate a meeting with Communicorp media to discuss important industry issues raised by us” despite previous letters last sent February, March and June.