Lucy Kellaway: it can be good to have a public punch-up

Meg Whitman’s lieutenant was ‘disappointed’ with what I’d written. Here is my response 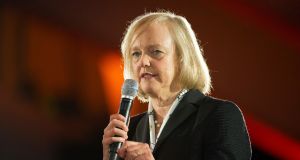 Meg Whitman: Her advice in Davos was “you can always go faster than you think you can”

Last week I received an email from Henry Gomez, head of marketing and communications at Hewlett Packard Enterprise, objecting to a column I’d written the previous week. In it I’d repeated the advice his boss, Meg Whitman, gave to an audience at Davos – “you can always go faster than you think you can” – and pointed out that, no, you can’t. Sometimes when you go faster you fall flat on your face.

Whitman’s lieutenant told me he was “disappointed” by what I’d written, including a “snide” dig at her predecessor’s purchase of Autonomy. He assured me I’d “mischaracterised” the remarks of his boss, who was the “leader of one of the world’s largest IT companies” and had a “well-founded perspective” on change management.

Then, in case such avowals of her importance failed to carry the day, he wound up with a threat: “FT management should consider the impact of unacceptable biases on its relationships with advertisers.”

It is a very long time since I’ve been at the receiving end of such aggression. When I started out in journalism this sort of thing happened the whole time – whenever a chief executive didn’t like what you’d written he was quite likely to snatch up the telephone, and shout and threaten you down it.

Then, after the invention of PR, the shouting stopped. If you offended a captain of industry a flunkey would invite you over to a lavish lunch with him so that he could tell you how marvellous he was. Yet even those grim meals are in the past. The most popular way of dealing with tiresome journalists or with conflict of any sort is silence. Business has gone entirely passive aggressive.

In that spirit I sat down to compose a reply to Mr Gomez. “Dear Henry,” I wrote. “Thank you for your message, which I’ve read and noted.”

I looked at what I’d written, deleted “and noted” and typed “with interest” instead. I signed off “Yours sincerely, Lucy Kellaway”, and pressed send.

So with this column I am retracting my first answer to Mr Gomez, and going for the liberating, aggressive version instead. He was aggressive to me. I’m returning the favour.

More than that, I’m choosing to have this fight in public, not only because I suspect readers are so starved of overt conflict in their own working lives they’ll enjoy witnessing a punch-up. The more important reason is that this is something I mind about – it matters. My considered response goes like this:

I want to apologise for the disingenuousness of my last email. I don’t thank you for your message, which I found – to borrow your word – disappointing.

You say the FT management should think about “unacceptable biases” and its relationship with its advertisers. My piece was not biased and I fear you misunderstand our business model. It is my editors’ steadfast refusal to consider the impact of stories on advertisers that makes us the decent newspaper we are. It is why I want to go on working here. It is why the FT goes on paying me.

Three, I see you are in charge of both marketing and communications. The latter role means you have to help your company look good in the eyes of the media and the world. Your email fails to do that.

And, most troubling of all, as head of marketing you are likely to have an interest in ensuring that the company’s advertising message reaches the right audience. Assuming the decision to advertise was right in the first place, it would seem crazy – and not in shareholders’ best interests – to change course based on pique.

It is, of course, possible that you aren’t to blame for any of this, and the order came from on high. I want to think well of Ms Whitman. I adore eBay, which she made great. She may have said something daft at Davos – and, as I pointed out in my column, she was in very good company there – so I don’t want to believe she told you to write to me. Please tell me it isn’t so.