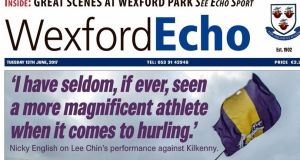 The High Court has appointed a provisional liquidator to the publisher of four weekly newspapers in Co Wexford employing 30 people.

The provisional liquidator, Kieran Wallace of KPMG, will keep the Wexford Echo, Gorey Echo, New Ross Echo and Enniscorthy Echo open while efforts are made to find a buyer for the titles.

Mr Wallace was appointed on Thursday evening by Mr Justice Paul Gilligan on foot of an application by lawyers for the company.

The judge said he was satisfied to appoint Mr Wallace after being informed the company is insolvent and unable to pay its debts.

The company, a member of the Landmark Media Group, also operates its own website. Its directors are Thomas Crosbie, Noel Wall, Daniel Francis Linehan, Thomas Joseph Murphy and Sean O’Keeffe.

Seeking the appointment, Garvan Corkery BL, for the company, said the winding up order was being sought due to the decline of newspaper sales and advertising globally and in Ireland.

This decline has caused trading difficulties for the sector generally and in particular the company, he said.

The company had been loss making and at the end of May last, had net liabilities of €834,000. It had been dependent on the continued financial support of its affiliates in the Lankmark Media Group to meet its liabilities but, in light of its trading difficulties, Landmark had decided not to support the company any longer.

As a result the company’s shareholder had passed a resolution for it to be wound up and for appointment of a provisional liquidator.

Mr Wallace would be able to preserve the saleability of the titles and could effect a rapid sale if the demand for such a transaction emerges, he said. Any suspension of the publications, even temporary, could prejudice any possible sale.

The company provides sub-editing and page production services for two other titles in the Landmark Group, the Waterford News and Star and the Nationalist and Leinster Times and Mr Wallace would ensure those services could continue in the interim, he added.