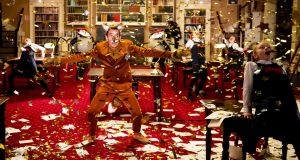 The Late Late Toy Show was watched by an average of 1.5 million viewers live on RTÉ One on Friday night, up 11 per cent on its 2019 live audience, as the difficult times brought by the Covid-19 crisis heightened the sense of national occasion around the event.

This makes it one of the most-watched programmes on Irish television on record.

Almost four in every five people who were watching television at the time were tuned into the socially distanced Toy Show, which captured a phenomenal 79 per cent audience share.

RTÉ said television viewership of the show, which was recorded without a studio audience, stood at 1.7 million so far. Some 176,000 people watched the Saturday repeat, while viewing on the RTÉ +1 channel has also added to the tally.

Separately, there were more than 500,000 streams of the programme on RTÉ Player live and across the weekend, a record-breaking one for the broadcaster. The majority – some 359,000 – were live streams.

The “reach” of the show over the weekend, a figure that reflects people who watched for as little as a minute, was estimated at 2.4 million.

Video clips from the emotional two-and-a-half-hour programme, which raised €6.5 million in a charity appeal, also garnered 5.85 million views on RTÉ’s Instagram and Facebook accounts, while #LateLateToyShow was the number one worldwide trend on Twitter on Friday night.

However, The Late Late Toy Show will have to wait until the consolidated ratings from TAM Ireland and Nielsen are finalised to see if it can officially claim its traditional number one spot in the annual list of most-watched programmes.

This is because a record-breaking 1.59 million viewers tuned into RTÉ One on St Patrick’s Day to watch Leo Varadkar’s emergency broadcast to the nation as the pandemic crisis unfolded. About 237,000 also saw his address live on Virgin Media One.

The Toy Show is on track to overtake Mr Varadkar in the days ahead. The overnight ratings for last year’s Toy Show on its RTÉ One showing alone were 1.35 million, but this subsequently rose to 1.54 million in Nielsen / TAM Ireland’s consolidated ratings, which include people who watch back a recorded programme within a week of its broadcast. RTÉ Player views are counted separately.

“The true essence and magic of The Late Late Toy Show was really captured this year with the wonderful children involved. To hear that it was beaming into 138 countries across the globe is just phenomenal,” said presenter Ryan Tubridy.

“The fact that children and their families who might not be able to get back home this Christmas got to join with us in unison was very important to us. The Irish people continue to astound with their ability to dig deep and support The Late Late Toy Show appeal, raising much-needed funds and truly exceeding all expectations with their generosity. I think it’s safe to say we are truly humbled by the reaction to the show.”