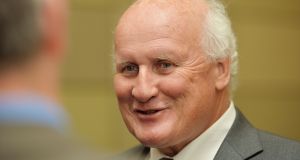 Former Aer Lingus chief executive Colm Barrington is to join the board of the Nordic airline Finnair. Photograph: Alan Betson

Brexit is already affecting the Irish business landscape, according to the Sunday Business Post. The paper reports that insolvencies rose by 13 per cent in the second half of 2016, with Border counties the worst affected. It also states the value of domestic deals fell by 26 per cent in the final quarter, with financiers attributing this to a decline in corporate confidence on the back of the Brexit vote. It comes as the boss of of food giant 2 Sisters, which owns Green Isle Foods, is quoted in the Sunday Times as saying that Government complacency in the face of Brexit could lead to some companies here moving operations to Britain. Similarly, the chief executive of Dawn Farm Foods warns that without state support there was a real danger of Irish jobs in the food sector being “offshored” to the UK. On a more positive note, the Sunday Independent reports the Irish Stock Exchange has launched a marketing offensive in the UK to encourage British firms to list here as a European gateway to EU investors.