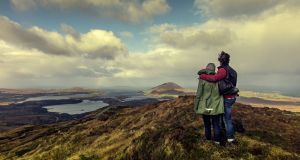 Tourism Ireland’s new global marketing campaign reaches German television this week in the next phase of its bid to persuade more tourists to choose Ireland for off-season breaks.

Mark Henry, the all-island body’s central marketing director, said the “Fill Your Heart with Ireland” advertisements would begin on British and French channels in the next two months. They will also return to television screens in Germany and the United States in August and September in a fresh push for autumn visitors.

The campaign, made by Tourism Ireland’s creative agency Publicis London, features a real-life Swedish couple, who were invited to take a trip around Ireland wearing head-mounted cameras and heart-rate monitors.

In a tourism advertising first, the data provided by the monitors determined the footage that would be used in the campaign.

The material was filmed in October, which might typically present some logistical hurdles for tourism marketers keen to dispel a destination’s reputation for poor weather.

However, this campaign is designed to tap into surging holidaymaker interest in off-peak outdoor activities such as cycling, walking and kayaking – “not necessarily things that have to be done in July and August”, Mr Henry said.

“Normally I’m the one on set shouting for the jumpers to be taken off, but this time it was ‘put the jumpers on, I don’t care how unseasonably warm it is for October’.”

The “fill your heart” slogan received positive feedback during research conducted in 2018, Mr Henry said, and will likely be retained for the next five to seven years.

The campaign has a media spend of €16 million in 2019. It has already run in cinemas in the key markets of Britain, France and Germany, while it appeared on US television from December 26th to capture attention during what is the busy holiday-planning period for US travellers.

It will also target potential visitors from Canada, Australia, Spain, Italy, the Netherlands and Scandinavia later this year.

Tourism Ireland has spent €1 million on producing the ads and digital marketing assets for this first phase, which showcases the less busy parts of the Wild Atlantic Way north of Galway as well as activity and tourist spots in the North.

Locations used in this phase include Westport, Achill Island, Bundoran, Inishowen and Fanad Head in Co Donegal, Kylemore Abbey and Diamond Hill in Connemara, Devenish Island and Finn Lough in Co Fermanagh, and the Gobbins cliff path in Co Antrim.

In a break from tradition, the Giant’s Causeway does not feature. “We went with Titanic Belfast instead, because it makes sense to install new icons in people’s minds,” Mr Henry said.

Later this year, Tourism Ireland will invest a further €1 million in another phase featuring locations that fall under the Ireland’s Ancient East label.

One difference between now and eight years ago, when it devised its last major campaign, is that digital ad targeting can be exploited to serve internet users iterations of the ad that are tailored to their interests.

One edit of the digital video ad, for example, concentrates solely on landscapes, another on “soft adventure” activities, another on food and drink and another on heritage.

“That’s a fantastic capability that wasn’t there eight years ago.”

Mr Henry said the overarching challenge facing the organisation had changed significantly since the 2011 launch of the “Jump Into Ireland” campaign, which came after three years of declining tourism numbers.

At that time, tourism bosses were under pressure to increase visitors and revenues sharply while the financial bailout was under way and boom-time levels of hotel construction meant there was a surplus of rooms to fill.

This creates “an opportunity to look beyond demand generation to demand management”, he said.