Ryan Reynolds and Rob McElhenney have won approval from supporters to buy Wrexham AFC, the oldest football club in Wales 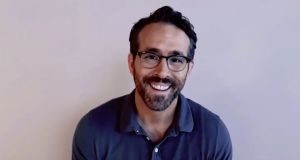 A screengrab from a video posted by @Wrexham_AFC of Hollywood star Ryan Reynolds, who along with Rob McElhenney have become the new owners of Wrexham after their takeover bid was approved by the National League club’s Supporters Trust. Photograph: PA

Wrexham Supporters Trust, which owns the club, gave its overwhelming support to the Hollywood duo, with more than 98 per cent of votes going in favour of the three resolutions required to pass the deal.

The takeover highlights the global appeal of English football to investors that range from nation-states and sovereign wealth funds to wealthy individuals such as the Hollywood pair.

Canadian Mr Reynolds is known for portraying Deadpool, an edgy superhero, while Mr McElhenney is the creator of US sitcom It’s Always Sunny In Philadelphia. Their RR McReynolds Company vehicle will take control of Wrexham, subject to “final agreement” and approvals from the league and the Football Association, the governing body.

Although located in Wales, Wrexham plays in the National League, the fifth-highest level of football in England. Clubs compete for promotion to League Two, which sits behind League One and the Championship in the competitive ladder to reach the Premier League, the richest domestic football league in the world.

The new owners have pledged to improve the team and win promotion, while increasing attendance and upgrading the club’s Racecourse stadium, which seats 10,500 people.

Their mission statement also made repeated promises to “always beat” Chester, the club’s biggest rivals, on the proviso that they ever play each other again. Chester plays in the division below Wrexham.