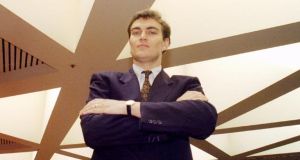 Cameron O’Reilly said the new venture would be profit-focused and was not intended as an act of philanthropy. File photograph: Megan Lewis/Reuters

The new venture will operate as part of Crikey, an online news service whose shareholders include Private Media, where Mr O’Reilly is among the backers alongside veteran Australian media investor John Fairfax.

According to a number of local reports, Mr O’Reilly and Mr Fairfax have put up two million Australian dollars (€1.27 million) between them for the new subscriptions venture, which will be formally launched in the coming weeks.

It is expected to launch with an initial staff of more than a dozen investigative reporters, and its income will derive entirely from payments by readers, rather than advertising.

Mr O’Reilly gave an interview about the new venture to broadsheet title the Australian, which has the biggest circulation in the country. He spoke of having “ink in his veins” and of “growing up” in the media industry while his father was the dominant figure at Independent News & Media (INM), before Mr O’Reilly stepped down a decade ago following a battle for control of the company with businessman Denis O’Brien.

“We almost took for granted the important role in society of newspapers,” Cameron O’Reilly said. “What happens if they are not there? We see what happens elsewhere in the world when you don’t have that. Having seen the older [business] models under threat, it is an obvious question: are there other models?”

Mr O’Reilly said the new venture would be profit-focused and was not intended as an act of philanthropy.

“We are pretty confident that this is going to be commercially viable... It is better to have a [profitable] venture. You are not waiting for the next sugar daddy to come along.

“If you really want to control your own destiny, your core needs to be consumer revenue – subscriptions.”

Mr O’Reilly, who runs investment firm Bayard Capital, said existing news groups in the universally-strained publishing sector would not be able to sustain profitability on the basis of making cost cuts: “It is not a solution. The solution is to make it profitable long term. And that’s about revenue growth.”