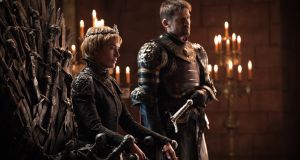 Screen tourism: Cersei (Lena Headey) sits on the Iron Throne, flanked by her brother Jaime (Nikolaj Coster-Waldau), in the seventh series of ‘Game of Thrones’

Tourism bodies in Northern Ireland have revealed they are working with the US television network HBO to “maximise” the Game of Thrones legacy as new statistics show the hit television fantasy drama helped boost visitor spend to a record £417 million (€464 million) in the first six months of 2017.

Latest figures from the Northern Ireland Statistics and Research Agency show that overnight visitors – many attracted by the pulling power of the weak pound – spent £2.3 million every day in the North between January and June.

Tourism NI chief executive John McGrillen said the figures meant Northern Ireland was on course for its busiest ever visitor year thanks mainly to an increased number of tourists from the Republic, Europe, North America and farther afield.

Mr McGrillen believes the North is also on target to achieve annual tourism revenues of £1 billion by the end of the decade.

This year he said old favourites and new attractions had been the secret to Northern Ireland’s record tourist spend so far.

“The positive growth has been supported by an intensive burst of partnership marketing initiatives in the Republic of Ireland, highlighting both well established and new tourism offerings from Titanic and the Causeway to Seamus Heaney Homeplace and the Game of Thrones tapestry, alongside high-impact campaigns in key markets across the globe by Tourism Ireland, ” Mr McGrillen said.

The production of Game of Thrones is based in Belfast and many of the key scenes in the popular drama are filmed on location in the North. However, the series is due to come to an end after one final batch of episodes, due to air in either 2018 or 2019.

The statistics show that two million people in total – both visitors and domestic tourists – spent their time and money in Northern Ireland during the first six months of the year, mainly to holiday or visit friends and family.

This represented a year-on-year increase of 200,000 additional trips compared with the same period in 2016 and an increase spend of £56 million.