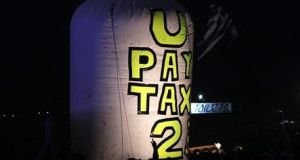 A balloon erected in front of the stage at Glastonbury where U2 were playing in 2011.

The low-tax music could soon be over for U2 and the Rolling Stones as the Netherlands plans to close a loophole that rock bands use for royalty payments.

The Netherlands is reforming its tax system to clean up its image and lure real investment rather than shell companies to the country.

Amongst other measures its parliament is considering taxing businesses that pay royalties in other countries with lower tax rates, or that the EU has deemed “non-co-operative”.

Such a move would close a loophole used by rock bands such as U2 and the Rolling Stones to manage royalty payments from their records and performances.

The bands license their copyright to companies that they set up in the Netherlands, which in turn license it to companies in other countries.

While the Netherlands companies receive the bands’ global royalties, they only pay tax on what is earned in the Netherlands itself, allowing the groups to cut their tax bills.

U2 can earn around €5 million a night from its concerts, promoter John Giddings told the BBC last month.

The band moved some of its businesses from the Republic to the Netherlands earlier this century after the Government capped a previously unlimited tax break on artistic earnings at €250,000 a year.

The Irish band, whose frontman Bono advocates for causes such as justice for poorer countries, has come under fire in recent years for its tax structures.

Protestors turned up with a banner asking “U pay tax 2?” when the group headlined Glastonbury Festival in Britain in 2011.

However, Bono - real name Paul Hewson - and guitarist the Edge - David Evans - subsequently said that the band paid a “fortune” in tax and was happy to do so.

The musicians argued that they had their businesses structured so they paid sensible amounts of tax.

The EU views the Netherlands as a low-tax jurisdiction. The country offers breaks to multi-nationals that set up head offices there.

It was the “meat” in the double-Irish Dutch sandwich, a structure also based on licensing intellectual property, used by multi-nationals with operations in the Republic to limit their tax bills.

Until the Irish Government closed the loophole in 2016, vulture funds such as Cerberus used a combination of Irish and Dutch companies to reduce taxes.

While the Netherlands is looking to change some of its tax rules, its government is also considering cutting levies on corporate profits and dividends paid to company shareholders. Additional reporting: The Financial Times

1 How can I view my dead brother’s will if I’m not the executor?
2 Provisional liquidator appointed to Dublin engineering firm
3 Investors pile into property as turnover in build-to-rent sector reaches €2.54bn
4 Mount Charles wins €10m catering contract at Maynooth University
5 Travel costs for IDA chief topped €45,137 last year
6 Glencore to shake up its top tier with younger leaders
7 Bursting of Tesla bubble a case of ‘not if, but when’
8 Germany drops opposition to fiscal boost in event of downturns
9 Kerry’s Chinese sales set for 30% hit from coronavirus
10 Bank of Ireland staff in line for 2.95% pay increase
Real news has value SUBSCRIBE