INM chief keeps his cards under the table over agm vote 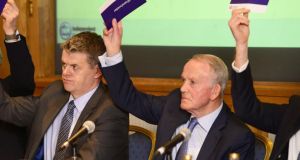 Independent News & Media (INM) chief executive Robert Pitt’s recent indication that he may vote against resolutions at an upcoming shareholder meeting is understood to “relate directly” to the re-election of Leslie Buckley as chairman, according to a leading shareholder advisory firm.

Mr Buckley said in a letter issued to shareholders ahead of the newspaper publisher’s annual general meeting (agm) on August 23rd that Mr Pitt “reserves his position” on how he will vote on resolutions at the meeting – an unprecedented move for the head of an Irish publicly listed company. The letter did not indicate which resolutions Mr Pitt might oppose.

However, Glass Lewis, a leading international advisory firm to large investors on corporate governance issues, which would engage with companies ahead of agms, said in a report issued to clients this week: “It is understood that Mr Pitt’s decision related directly to the re-election of Mr Buckley as chair and illustrates the hostility currently at play between the two directors.”

Mr Pitt later made a protected disclosure to the Office of the Director of Corporate Enforcement about the row. Glass Lewis said it believes that an independent review that the board commissioned on the matter is nearing completion.

“We will continue to monitor the issue, going forward, and await the findings of the review and the Office of the Director of Corporate Enforcement,” the proxy advisory company said.

Glass Lewis, however, has recommended that its clients who are INM shareholders vote in favour of all resolutions being put before investors at the agm, including Mr Buckley’s re-election.

INM issued a profit warning on July 19th, which it partly attributed to costs associated with the independent review and meeting the requirements of the Office of the Director of Corporate Enforcement, as well as falling newspaper circulation and advertising revenues.

A spokeswoman for INM declined to comment on the Glass Lewis report.

1 Johnny Ronan loses out on €315m Dublin docklands deal
2 Pre-flight Covid tests possible ‘within days’ if given go-ahead – airports
3 Ryanair and Aer Lingus to cut further flights from regional airports
4 Meath site primed for delivery of enterprise and employment
5 Bank of Ireland takes €169m charge for 1,700 job cuts
6 How long can Government afford to keep State pension age at 66?
7 City businesses can’t afford to wait for a Covid-19 vaccine
8 How much state pension will I get next year?
9 Budget 2021: fuel prices rise and high-emission cars hit
10 PTSB plays down Ulster Bank talk as it sells €1.4bn of loans
Real news has value SUBSCRIBE