Google and Facebook continue to have too much power 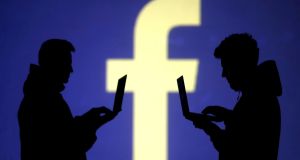 Facebook says it is refusing referendum advertisements that originate from outside Ireland. Photograph: Dado Ruvic/Reuters

It is no exaggeration to say that a key political narrative of the past three years has been the extent to which two of the biggest companies in the world, Google and Facebook, have facilitated the undermining of democratic processes. What’s more, unhindered by any regulation whatsoever, they appear to have profited gloriously from doing so.

The referendum on the Eighth Amendment marks the latest entirely predictable occasion in which Google and Facebook have become tools of what the tech industry refers to as “bad actors” – those that seize upon the platforms to intimidate and defraud others, to disseminate hate or to spread misinformation. The faker-than-fake claim that an abortion clinic is to open at a Kilkenny hospital is merely the latest example of vote-manipulating lies to be disseminated via social media, in this case through an anti-abortion, anti-immigration individual going by the reputable-sounding name of “The Kilkenny Journal”.

Prof Ray O’Sullivan, a professor of obstetrics and gynaecology at the hospital in question, has told local radio station KCLR said he found it “absolutely incredulous” that people would actually believe this “crazy stuff”. Unfortunately, it seems not everyone scrolling through their feeds will have paused to ponder Facebook’s ten tips for spotting false news, much less had the capacity to apply them to their understanding of reality.

This week, however, a little piece of online history may have been made. Google and Facebook have turned away money before, banning hate speech purveyors from their platforms or at least putting them on a naughty step. But Google’s announcement that it is to stop all referendum advertising citing integrity concerns, coupled with Facebook’s move to refuse referendum advertisements that originate from outside Ireland, is an unprecedented admission by the two companies of the damage they have the potential to cause.

These actions won’t stop the circulation of misleading referendum messages on the platforms, of course, but it will either prevent such messages from being amplified through paid ads (in Google’s case) or reduce the incidence in which this happens (in Facebook’s).

We still do not know how much money US-based interests were spending on digital ads placed with US-based tech giants to retain the Eighth Amendment of the Irish Constitution. (Indeed, we only have estimates for how much money Google and Facebook collect in total from advertising in Ireland). The anti-abortion side’s outlay may seem lavish to Repeal campaigners, but relative to, say, US presidential election advertising originating from Russia, the amount being sacrificed by Google and Facebook could well be small.

So while this referendum could prove a watershed – providing a hands-off template for how these platforms behave in other, much larger democracies in future – it may equally come to be seen as a mere blip in the digital ad duopoly’s unencumbered journey along a road of unchecked power.

Without regulation, the choice will be theirs.