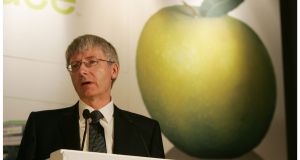 A 20 per cent boost in pay for Total Produce chief executive, Rory Byrne, accounted for most of the increase in what the company’s executives took home last year, according to its annual report.

McCann did well out of his stock. He held 4.4 million Total Produce shares on December 31st, worth more than €11.2 million at that point, compared with €7 million a year earlier.

A 30 per cent jump in the company’s share price was mostly responsible for this increase, but McCann’s acquisition of an extra 445,000 shares also helped.

McCann chairs another Fyffes spin-off, Balmoral International Land, which leases properties to Fyffes and Total Produce, among others. Total Produce charges Balmoral for the use of McCann’s time.