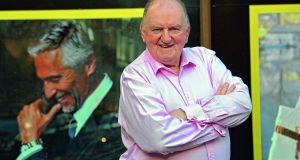 George Hook will retire from Newstalk in December, ending his 16-year relationship with the radio station, it has announced.

The presenter’s final edition of Hook’s Saturday Sit In will go out next month and he will leave the Communicorp Media-owned station at the end of his current contract.

“George has been with Newstalk since we launched in 2002 and in the intervening 16 years has made a great contribution to the station,” said Newstalk managing editor Patricia Monahan.

“I would like to take this opportunity to thank him and wish him well in his retirement.”

Mr Hook (77) presented the successful drivetime show The Right Hook for the station before moving to a midday slot in 2016.

He hosted this show, High Noon, for a year until September 2017, when a controversy arose from Mr Hook’s on-air suggestion that women who are raped bear some responsibility for the crimes committed against them.

The station said his comments were “totally wrong and inappropriate and should never have been made”.

High Noon was stood down and Mr Hook was temporarily suspended by Newstalk before returning to host the Saturday morning show in January of this year.