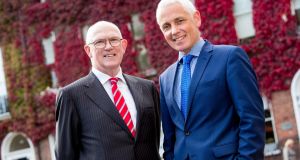 John Murphy, the former top civil servant at the Department of Enterprise, has joined public relations firm MKC Communications as a consultant in its public affairs practice.

Mr Murphy was the secretary general of what was then called the Department of Jobs, Enterprise and Innovation from 2011 until he retired in 2016, serving under minister Richard Bruton.

Mr Murphy said he was looking forward to helping the firm grow.

A 40-year civil service veteran, Mr Murphy helped to oversee Mr Bruton’s Action Plan for Jobs in the Fine Gael-led government that entered office when the State was still a ward of the International Monetary Fund.

He has previously served on boards including the National Roads Authority, the National Economic and Social Council and he also chaired a high level group on industrial relations structures in An Garda Síochána.