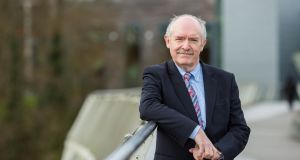 Former editor of the Star Ger Colleran is to take the reins of the weekly regional newspaper Kerry’s Eye in Tralee.

Staff were informed individually on Tuesday after news of the appointment leaked over the bank holiday weekend.

Mr Colleran was news editor of the Kerryman for many years before going on to become editor of the publication, which is Kerry’s Eye’s main rival. He was known for his feisty, combative style and interest in regional news.

He has retained strong links with Tralee and lives in the Kerry town.

Mr Colleran works as a newspaper columnist, broadcaster, television presenter and lecturer with a strong interest in the changing news industry.

It is expected he will take up his position gradually, probably around mid-November and work alongside current editor Colin Lacey for a period.

Founded by husband and wife Pádraig Kennelly and Joan Kennelly in 1974, Kerry’s Eye has a circulation of 25,000 and in recent years has expanded its editions to south and north Kerry.

It covers courts and local news, sport as well as general news and has a small core of full-time and part-time reporters as well as columnists.