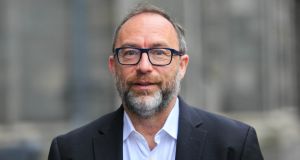 Jimmy Wales at TCD: “We need to pay journalists to continue to do something that often isn’t much fun because it is from local reporting that big stories often emerge.” Photograph: Gareth Chaney/Collins

“It is a really good time to own a construction company and be the brother-in-law of the mayor of a big city,” according to Wikipedia co-founder Jimmy Wales.

He’s joking, sort of, about how a declining number of journalists is great news for those engaged in dodgy deals. But in outlining what sounds like a plot twist in The Sopranos, Wales is also hinting at something very real. All news is local, so what happens when there are no more reporters covering the stuff that happens on our doorsteps?

It is something the entrepreneur has been thinking a lot about lately, following the introduction of WikiTribune, a new online platform aimed at bringing journalists together with volunteer contributors to ensure accurate reporting. The platform, which is currently in beta mode, is due to go live soon although Wales won’t be drawn on exactly when.

“We’re trying to avoid there being pressure around the launch by doing things quietly but that is proving hard to do because I keep talking to so many journalists,” he tells The Irish Times.

Wales is in Dublin to speak at a public event in Trinity College to mark Ireland’s Internet Day. In addition to discussing how Wikipedia came into existence, he also outlined his plans for his latest pet project and talked about how it might help in the battle against fake news.

If there is a degree of expectation about WikiTribune, then Wales and his co-founder Orit Kopel have brought it on themselves.

“The news is broken and we can fix it,” the co-founders said announcing the new platform in April. That is one hell of a bold statement to make. However, Wales insists that the success of Wikipedia has shown that public participation in gathering information can work.

Created in 2001, Wikipedia has grown into one of the largest reference websites in the world with 71,000 contributors and an estimated 46 million articles in 299 languages.

In its early years, the site became better known for it inaccuracies than anything else. But over the years, as tighter controls have been introduced, it has become considerably more reliable.

“Wikipedia was seen as a bit of a joke early on but now people come up to me and say it is the only thing they really trust nowadays. I always respond by saying we were never as bad as people thought we were and definitely never as good as they think we have become now,” says Wales.

“It is still a noisy place where mistakes happen,” he adds.

Nonetheless Wales adds that the impact of fake news on Wikipedia has been “close to zero”.

“Wikipedians question everything, whereas consumers may not,” he says.

Wales sees WikiTribune as an experimental project that is aimed at finding out how communities can be brought into the news process in a more systematic way to ensure better accuracy in reporting.

“For the most part, the usual way the public takes part in the process is by adding their comments at the bottom of articles but that can be disheartening because there is often a lot of yelling. But then you look at how Wikipedia works and it is generally nice people trying to get things right and doing amazing stuff. I feel there must be some way to bring that spirit into news to make sure reporting is neutral, fact-based and so on,” he says.

“Part of the philosophy here is that we know that the public can help in lots of positive ways. If we can reduce the overall costs of journalism by harnessing community participation we can empower more journalists and help them get out of the office,” he adds.

WikiTribune is intended to be ad-free, at least initially. The thinking is that this means there’s no need to go down the clickbait route to win over advertisers. It will also allow journalists to cover more niche topics.

“There are plenty of things not covered by traditional media. Two examples that spring to mind are dog shows and online gaming as a sport. If they do get a mention it is just to mock them. But, you know, you or I might not care about either of those things but they are subcultures that others are interested in that are being ignored. With WikiTribune there is a chance for the community to choose what it wants to see reported, no matter what it might be,” says Wales.

While the platform will be ad-free and won’t cost the public anything either, there is a hope that consumers will back the project voluntarily with most of the proceeds going to pay journalists.

“A lot of what doesn’t work about citizen journalism is that the only people likely to rock up to a council meeting every week outside of a journalist is an activist, because it is ultimately something that is pretty boring. So we need to pay journalists to do something that often isn’t much fun because it is from local reporting that big stories often emerge,” he adds.

Keeping things local is something that Wales believes is critical for democracy and he envisages community chapters of WikiTribune opening up so that Dublin or Manchester, for example, might get their own particular versions of the platform.

“I grew up in Huntsville, Alabama, and at that point it had a population of about 250,000 and both a morning and an evening paper. The morning edition disappeared years ago, while the afternoon edition was cut to three days a week and now carries a lot of wire copy. The town has grown to about 300,000 people but it doesn’t have much access at all to local news anymore. This is something that is being replicated all over,” says Wales.

“If there are a large number of journalists writing about what Donald Trump tweeted last night and the number of them falls by half we’ll get by, but if the number of local reporters in say mid-size cities goes from eight to one then we have a big problem,” he adds.

Part of the reason for establishing WikiTribune, outside of concern over shrinking newsrooms, is, of course, the rise of fake news, a term that Wales admits he struggles with.

“It’s a super-tricky term. It is one thing to have teenagers in Eastern Europe churning out fake information simply to earn money and having people doing a similar thing who have a political agenda,” he says.

Moreover, he admits to being “a first amendment guy” who is wary of plans to introduce fines for social media firms that don’t move to counteract fake news.

“I’m concerned about the outcry that Facebook should do something. It feels like a bit of a panicked response. Sure, it can do more but you can easily imagine different historical circumstances in which instead of us begging the company to do something, we’d be horrified that Facebook would take it upon itself to decide what news is real or not. That’s a dystopian nightmare,” says Wales.

“What would be good is if Facebook would alert me if something has been debunked by a reputable organisation but still let me go ahead and share something if I wanted to,” he adds.

As a self-confessed news junkie, Wales tries to read as widely as possible but he doesn’t want to force his way of being on others.

“Plenty of people are not news junkies and in free societies you shouldn’t have to become an expert on sourcing the news in order to deserve to be given quality information,” he says.

“With WikiTribune what I’m doing is simply to build something I would enjoy and which I hope other people will like as well.”