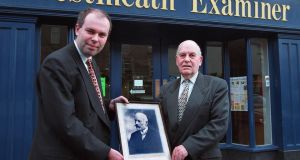 Nicholas Nally (right) in 2000 with his successor as editor of the Westmeath Examiner, David O’Riordan, holding a photograph of the newspaper’s first editor, John P Hayden. Photograph: Paddy Whelan

The death has occurred of Nicholas Nally, former editor and owner of the Westmeath Examiner. Mr Nally, who was aged 90, died peacefully at Newbrook Nursing Home in Mullingar on Saturday morning.

He edited the Westmeath Examiner for almost 50 years and was a major figure in the local newspaper industry, serving as president of the Provincial Newspapers Association of Ireland.

During a career that spanned seven decades, he also acquired the Westmeath Independent and Offaly Independent titles and became the foremost media owner in the midlands.

Frank Mulrennan, chief executive of Celtic Media Group, owner of the Westmeath Examiner, said Mr Nally was one of the finest local newspapers editors, who had left a proud legacy to generations of journalists.

The removal of his remains takes place to the Cathedral of Christ the King, Mullingar, on Monday, arriving at 6.30pm, with the funeral Mass to take place on Tuesday at 10am.

1 Three Ireland switches on 5G network around the country
2 Should I switch bank now with Ulster Bank at risk of closing?
3 Me & My Money: ‘Money can’t buy you happiness but it can make life a lot easier’
4 Mortgage breaks will not be extended beyond this week
5 Airasia’s Fernandes predicts short-haul flying to recover first
6 Am I paying too much for my buy-to-let mortgage?
7 Dublin-based ID-Pal raises €1m in funding as it looks to expand
8 McCloskey International bought by Metso for €279m
9 Stripe takes part in major fundraising rounds for Stedi, PayMongo
10 Estée Lauder staff at Dublin airport plan further strike action
Real news has value SUBSCRIBE