MMA fighter involved in trademark battles with German, Dutch, English and US brands 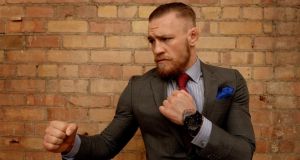 Irish MMA world champion Conor McGregor is slugging it out with a number of consumer brands in various trademark disputes. Photograph: David Sleator

Mr McGregor has since late last year been trying to trademark across Europe several words and phrases associated with him, as part of a strategy to capitalise on his global commercial appeal as one of the world’s best-known sports stars.

In September, the month following his boxing bout against Floyd Mayweather, which earned the Irishman $100 million, he applied for a European trademark for “Mystic Mac”, a nickname he acquired for predicting his fights.

Last Month it was opposed by Make Up Cosmetics (Mac) Inc, the New York-based make-up giant, which is arguing that it could be confused with its products if Mr McGregor uses his proposed brand to sell men’s toiletries.

The Irishman’s “Mystic Mac” application was also last month opposed by the German company that owns the Mac Jeans brand, which claims it would confuse its customers if applied to clothing.

Mac Jeans and make-up brand Mac, for which Mr McGregor’s sister Aoife once worked, have until June to provide further evidence to back up their case at the European Union Intellectual Property Office (EUIPO) in Spain.

Mr McGregor, through his commercial vehicle McGregor Sports and Entertainment, is also seeking a European trademark for “ChampChamp”, a moniker he publicly bestowed upon himself as the holder of world belts in two different weight divisions in Mixed Martial Arts (MMA) fighting.

That application was last month opposed by the Irish division of the global company behind the Champion sportswear brand. It is also being opposed by Cleats LLC, a US company that makes the Champ brand of sports footwear studs.

In addition, he is seeking a European trademark for the phrase “I Am Boxing”, which was last week opposed by Swiss retailing behemoth Migros, which has annual revenues of about €23.7 billion. It sells the “I Am” brand across several product classes of cosmetics and clothing.

A bid by Seamus O’Hara of Carlow Brewing Company to block Mr McGregor’s attempt to register “Notorious” for a proposed whiskey launch is ongoing.

Documents from EUIPO also appear to suggest settlement talks have recently broken down between Mr McGregor and two brothers from Liverpool, who own the Notorious Fightwear brand in the UK.

The Irishman’s attempts to register “Conor McGregor” for clothing are opposed by Dutch fashion company, Doniger, which already sells McGregor menswear. Both sides in that dispute have asked for a EUIPO “cooling-off period” to be extended until 2019, which suggests that settlement talks may be ongoing.