Marketing spend by Irish companies forecast to rise in 2018 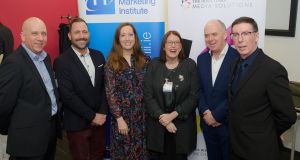 More than a third of companies in Ireland say that they plan to increase their spend on marketing in the year ahead, according to a new survey of marketing decision-makers by the media agency, MediaCom Ireland, The Irish Times and the Marketing Institute of Ireland (MII).

However, total spend on marketing only represents an average of 8 per cent of company revenues, according to the survey, and Ireland lags major markets such as the United Kingdom and United States where the comparable figure is about 11 per cent.

Almost half of marketing managers plan to invest more in ecommerce or ensuring their website is fit for transactions, 30 per cent in advertising and 25 per cent in public relations and communications, the survey found.

The five highest rated media channels for increased investment in 2018 are all digital ones: 49 per cent say they will invest more in social media, 28 per cent in content marketing, 25 per cent in search, 24 per cent in digital video and 24 per cent in online display advertising or programmatic (automated) advertising.

The survey of 249 people was conducted for MediaCom Ireland by iReach using their online panel of business people across small, medium and large enterprises, as well the MII’s membership database.

“The industry needs to collectively work on proof of marketing return on investment to boost this,” he said.

“The challenge for the profession is to ensure we have the leaders in place with the requisite skills to win the confidence and support of the chief executive and the board,” said MII chief executive Tom Trainor.

“The marketing sentiment study shows that the issue of brand safety and media trust continue to be ones which challenge the marketing communications industry,” said The Irish Times media solutions director Eimear Moran.