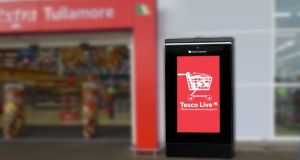 An example of a Tesco Live digital advertising screen outside one of the retailer’s Irish stores. Clear Channel Ireland has won the contract to manage advertising on the network.

Clear Channel will launch the Tesco Live network of 70-inch high-definition screens and will be responsible for maintaining and selling the associated advertising space at selected Tesco stores.

“We are delighted to win the Tesco contract at this exciting time for out-of-home in Ireland. This is a significant investment in digital out-of-home,” said Clear Channel Ireland managing director Terry Buckley.

CCI is part of Clear Channel Outdoor Holdings (CCO), an out-of-home advertising company with operations in more than 40 countries. CCO is, in turn, part of iHeartMedia, the global media and entertainment company.

Amscreen has a network of 15,000 screens across Europe with retail partners including BP, Shell and Costa Coffee as well as Tesco. The chairman of Amscreen’s parent group, Amshold, is Alan Sugar, the entrepreneur best known for founding electronics company Amstrad and starring in the BBC’s The Apprentice.