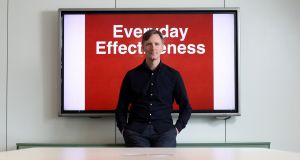 Advertising in Ireland is “a very homogeneous industry” and needs to do more to reflect the diversity of the population, according to the new president of the Institute of Advertising Practitioners in Ireland (IAPI).

“The industry also tends to be south Dublin-educated white people, so we need to address that,” Mr Murphy said. “I think we can do a lot.”

Ms Barker, alongside Mr Murphy, will now lead a fresh push on diversity and gender balance in an industry where 52 per cent of the employees in member agencies are female, but where women hold just 20 per cent of senior roles.

That proportion has improved since 2013, when it was just 13 per cent, but still compares unfavourably to gender balance in the UK advertising industry where the equivalent figure is 27 per cent.

“People will say, ‘look at our agency, half the people are female’ or ‘the entire client service department is female’ and yes, it might be, but when you get to board level, that is not the case,” Mr Murphy said.

Issues such as paid maternity leave “was a problem in our industry for some time” but is improving: Some 81 per cent of Irish agencies have it in place, according to the most recent IAPI “census” of its members.

IAPI has previously highlighted the “startlingly young” nature of the industry, with only 6 per cent of the more than 1,800 people who work for member agencies over the age of 51.

This is partly a result of people leaving the industry during the recession and not returning, but there is also “unconscious bias” at play, according to the IAPI president.

“Adland” faces broad challenges on the talent pipeline front and improving the industry’s links with the education sector is another of Mr Murphy’s objectives.

Data analysis, in particular, is an in-demand skill and there is a sense that advertising is losing out to other industries when it comes to hiring.

The commercial environment for advertising agencies is looking “a whole lot better” now after a painful recession,” Mr Murphy said.

Fees are starting to nudge up for creative agencies, having plunged as much as 30 per cent in 2011. “But in general, the margins are still too tight and that’s something we will be working on,” he said.

1 Google tells workers to return to country where they are employed
2 The Devlin hotel operator sues insurer over Covid losses claim
3 Subway bread too sweet for the Irish tax authorities
4 Recurring Covid restrictions will kill off many viable businesses
5 Benefacts facing closure due to funding doubts
6 Sean Quinn stunned at rebranding of Quinn Industrial Holdings
7 Pension problems: Workers ‘leaving free money on the table’
8 Some New Look landlords seeking a ‘gamble’ with 475 jobs, court told
9 Probate is changing: What does that mean for you?
10 CRH finance chief announces surprise exit
Real news has value SUBSCRIBE