Five lessons from this year’s crop of Super Bowl ads 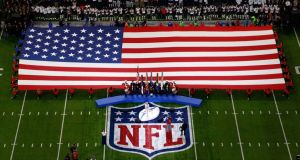 Advertising during the Super Bowl reveals the prevailing creative thinking at the highest end of the advertising business. Photograph: Rob Carr/Getty Images

As strange and disorientating as it is to seek out ads from another culture, there’s much to be learned from scouring the internet for the annual batch of Super Bowl “commercials” that are beamed across the United States with almost as much ceremony as the game itself.

Who knew that Groupon was still a thing? Or that website builder Squarespace doesn’t just advertise on podcasts, but has signed up Keanu Reeves as its motorcycle-surfing spokesmodel? And then there’s the disturbing discovery that Pringles are on a campaign to make Pringles fans buy all of their varieties and “stack” them in a gross-out flavour medley.

Advertising during the Super Bowl, which for the US television industry is the tent-pole event to end all tent-pole events, sets companies back more than $5 million for each 30 seconds of airtime, plus the length of a piece of string on production costs. As a result, the ads that are out to bat for their respective brands serve as a big, overnight reveal of the prevailing creative thinking at the highest end of the advertising business. So what did this year’s lot say?

With the exception of, um. . . Google, Google, Google. . . the Philadelphia Eagles, the biggest winner on the night was probably Tide. Procter & Gamble’s very funny sequence of ads for the detergent brand not only had the good taste to use Stranger Things actor David Harbour, but the wisdom to play the meta, self-referential card.

Some ads weirdly forget that consumers understand the language of advertising. Procter & Gamble’s flawlessly executed trick was to parody multiple genres of ads (for cars, beer, technology, pharma) and then have Harbour popping up to point to the spotless clothes giveaway that “It’s a Tide ad”. The lesson from its success is that there are prizes for flattering the audience’s intelligence, while also, crucially, giving them a laugh.

Social media users are well-used to the cutesy phenomenon of brands, or rather their social media managers, “talking” to each other online, with various degrees of spontaneity. Consumer goods conglomerates are now going one step further.

While the Tide ads included callbacks to well-known ads for Procter & Gamble stable mates Old Spice and Mr Clean, Doritos and Mountain Dew combined for a lip-syncing “battle”. Dubbed “a rap of fire and ice”, Game of Thrones star Peter Dinklage channels Busta Rhymes for Doritos Blaze, until Morgan Freeman morphs into Missy Elliott for Mountain Dew Ice. Both are owned by PepsiCo.

3. Star cameos are only as good as the script

“If in doubt, shell out for a recognisable face” is sometimes the favoured approach of brands that have run out of ideas.

This wasn’t the case with Amazon’s Super Bowl ad for Alexa, in which the digital assistant “loses her voice”, obliging nervous flunkies to explain to Amazon chief executive Jeff Bezos that replacements are available. These turn out to be inappropriate celebrities such as Rebel Wilson, who brings a chat-line interpretation to the instruction “set the mood”, and Anthony Hopkins, who goes all Hannibal Lecter in his Alexa. The ad won’t do much to settle the nerves of people worried that Amazon is listening to their every sneeze, but it is memorable and fun.

An advance series of “trailers” for a purported remake of Crocodile Dundee starring a bunch of “Aussiewood” actors was officially confirmed during the Super Bowl as an advertisement for Tourism Australia, which wants to get American bums on flights so badly that it spent more money than it ever has before on a single overseas ad.

It knows what “resonates” with US consumers: 1980s-style, “g’day mate” campaigns that might have people at home cringing, but succeed in cutting through to its target market. See also: the Irish tourism industry’s re-embrace of leprechauns.

5. Brands and products are not the same

The Super Bowl offered some clear-cut examples of this courtesy of ads by Budweiser and Stella Artois that ostensibly concentrated on water, not beer, with the Anheuser-Busch InBev brands promoting what they are doing to bring clean water to areas struck by natural disasters (Budweiser) and developing countries (Stella Artois).

Of course, whatever good their initiatives do on the ground, cause marketing is still marketing, and these ads have an underlying grimness. In particular, Budweiser’s proud totting up of how many cans of clean water it has delivered to Texas, Florida, California and US territory Puerto Rico throws the failures of federal aid into sharp relief.

“Whenever you need us, we’ll stand by you,” might seem like a feel-good slogan to Budweiser, but from the outside looking in, it looks like the exact opposite of what is going on in America.