Total of €12.2m from loans given by Bank of Ireland to be forwarded to Isle of Man firm 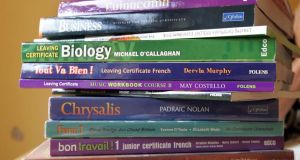 CJ Fallon is among a handful of publishers that supply both primary and secondary schools across the State. File photograph: Eric Luke

Dublin-headquartered educational publishing company CJ Fallon has completed a €25 million refinancing that will free up cash to provide a windfall for its US and Irish shareholders.

The company, which has been in operation for 90 years and publishes many well-known titles for primary and secondary schools, is owned by a consortium backed by US private equity group, Levine Leichtman Capital Partners.

The group is owned via a network of Irish and, ultimately, Isle of Man companies that were established for the Leichtman-backed buyout in 2015, when the publishing company was sold by another private equity player, Alan Dargan’s Lonsdale Capital.

Recent filings for several of the Irish companies in the CJ Fallon group show that last month it completed a refinancing funded by Bank of Ireland, which has provided two separate loans totalling €25 million.

The documents explain that, as part of the 2015 buyout, CJ Fallon had originally borrowed about €21.3 million from Ulster Bank, as well as €5.5 million from a Luxembourg company set up specifically for the deal.

The Bank of Ireland cash will be used to pay off whatever remains of both of these loans, the documents state, as well as to “return cash to group shareholders”. The documents do not reveal the exact sum that is being released to shareholders, or which investors are in line for the payout.

The documents state, however, that €12.2 million of the loan proceeds will be forwarded directly to CJF Holdco, a company registered in the Isle of Man, which will use an unspecified portion to redeem “preference shares”.

CJF Holdco’s directors include Mr Gilsenan, his finance director John Bodley, as well as several US-based executives of its private equity backer, including Lauren Leichtman, who founded the US firm with her husband Arthur Levine.

Leichtman financed the buyout of CJ Fallon just two years after it had been bought out in the deal backed by Lonsdale.

Prior to that, the company had been majority owned by Boundary Capital, the investment group linked to boom-time dealmaker, Niall McFadden.

It is among a handful of publishers that supply both primary and secondary schools across the State. Its titles include the Look, Listen and Learn series for young children, as well as the Chrysalis junior certificate English book.

Mr Gilsenan could not be reached for comment last night.