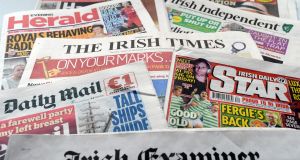 There have been a number of media ownership changes in the three years to 2017. Photograph: Alan Betson

A fresh examination of who owns and who controls media in Ireland is to be undertaken by the Broadcasting Authority of Ireland (BAI).

The authority is currently seeking external consultants to examine media ownership and write a report, updating the state of play since the BAI’s last examination which covered the period 2012-2014.

The new report, for which tenders are being sought, will examine media ownership and control in the period 2015 to 2017 to determine what, if anything, has changed since the last examination, the results of which were published by the authority in 2016.

That report concluded there had “not been a material reduction in plurality due to changes of ownership and control in the period 2012-2014”.

It said also that “the limited nature of the changes that took place between 2012 and 2014 means that the BAI is satisfied to conclude that these changes had no material impact on plurality of media in the State during the period”.

When contacted about the new report being commissioned, the BAI was unable to provide a spokesperson.

The new report is being sought under the Competition and Consumer Protection Act 2014 which gives the BAI responsibility to research media ownership and control, particularly in relation to mergers, and to write a report every three years for the Minister for Communications, Climate Action and Environment.

According to tender document details obtained by the Irish Times, the BAI wants the report being commissioned to “describe the ownership and control arrangements for undertakings carrying on a media business in the State; describe the changes in ownership and control arrangements of such undertakings over the previous three years (2015-2017); and provide an analysis of the effects of such changes on plurality of the media in the State as defined in the legislation. . .”

In describing any ownership changes, the BAI wants the consultants to “analyse the effects of such changes on plurality of the media in the State”.

The successful winner of the contract is to list all media businesses as defined by the Act, describing ownership structures and control arrangements, all relevant changes since the previous examination and “express an opinion on the impact of such changes on the plurality of the media in the State”.

There have been a number of media ownership changes in the three years to 2017, though The Irish Times’ proposed acquisition of the publishing and media interests of the Landmark Media Group, which owns the Irish Examiner as well as a number of other media assets, would appear to outside the timeframe of the BAI examination. The deal is subject to ministerial approval.

However, the report may examine and express a view on shareholder changes at Independent News and Media (INM), where Denis O’Brien remains the largest single shareholder, and INM’s abortive attempt in 2016 to buy Newstalk FM.

That move convulsed INM, leading to several boardroom changes and the current attempt by the Office of the Director of Corporate Enforcement (ODCE) to have the High Court send inspectors into the company.

The deal was abandoned, however, just before Minister for Communications Denis Naughten was to decide to accept, or reject, regulatory approval which had been given by the Competition and Consumer Protection Commission.

It is unknown whether the report being commissioned will examine any role by new media giants such as Facebook, Twitter and YouTube and any impact they may have had on media plurality in the 2015 to 2017 period.