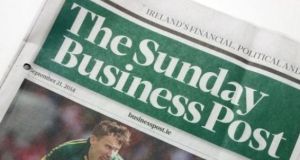 Sales of the Sunday Business Post rose by almost 5 per cent in the second half of 2017 to 31,674, which includes over 2,000 in online subscriptions

A number of potential buyers are still weighing up a bid for the Sunday Business Post with its owner forecasting the publication will return to profit after reporting a loss in its last financial year.

A spokesperson for the publication said the company remains “in active discussions” with a number of potential bidders and “was hopeful” that a deal could be concluded.

The spokesperson told The Irish Times, that the newspaper had been profitable over the last nine-months and expected a material turnaround to be recorded in the next set of company accounts.

Sales of The Sunday Business Post rose by almost 5 per cent in the second half of 2017 to 31,674, which includes over 2,000 in online subscriptions.

A note from directors with the accounts said the company “continues to outperform the market in circulation and advertising revenues.”

The accounts also note that the company incurred costs implementing a number of cost-saving initiatives during the reporting year, a period in which Siobhan Lennon replaced Paul Cooke as chief executive.

The Sunday Business Post newspaper and an associated printing business, Cork-based Webprint, were put up for sale by their private equity owners Key Capital last September.

Key Capital, which is chaired by Conor Killeen, led a consortium that bought the newspaper out of examinership in 2013 in a deal reported to be worth more than €1.2 million.

The Post was previously owned by Thomas Crosbie Holdings, which was once also the publisher of the Cork-based Irish Examiner, which is being acquired by The Irish Times.

1 Provisional liquidator appointed to Dublin engineering firm
2 How can I view my dead brother’s will if I’m not the executor?
3 Kerry trading profit rises 12.1% in year of mega-deal miss
4 Finance Ireland plans stock market flotation in May
5 Bank of Ireland staff in line for 2.95% pay increase
6 US reiterates opposition to Huawei equipment being used for Irish 5G
7 Bursting of Tesla bubble a case of ‘not if, but when’
8 Must you pay a price for ethical investment?
9 Finance Ireland’s IPO, Huawei and Irish 5G, and pay rises at Bank of Ireland
10 Irish Reits would benefit from property funds overhaul, Davy says
Real news has value SUBSCRIBE

Kerry trading profit rises 12.1% in year of mega-deal miss 07:38
Flutter’s planned merger with Stars gets informal approval in Australia 07:27
Finance Ireland’s IPO, Huawei and Irish 5G, and pay rises at Bank of Ireland 06:30
How can I view my dead brother’s will if I’m not the executor? 05:50
Stocktake: Would markets punish a Sinn Féin-led government? 05:40
Search executive
jobs on irishtimes.com