Terry Buckley steps down from INM board 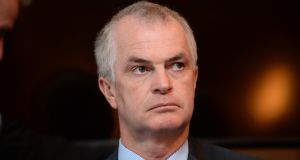 Terry Buckley had indicated to INM’s board in April his intention to resign.

Terry Buckley has stepped down as a director of Independent News & Media (INM). Mr Buckley, the managing director of outdoor advertising group Clear Channel Ireland, had indicated to the board in April his intention to resign.

His exit is just the latest in a raft of departures of INM directors as it looks to overhaul its board in the midst of one of the most tumultuous periods in the company’s history.

INM is currently fighting a State bid to have High Court inspectors appointed to investigate a range of allegations, including that its journalists’ sources may have been compromised.

Terry Buckley is well known to Mr O’Brien through their mutual involvement in the Special Olympics movement. However, INM previously said this was not sufficient to “compromise” his independence as a director.

Following the departure of Mr Buckley, INM’s board now comprises seven members, including its independent chairman Murdoch MacLennan. Three of the directors are considered independent, with three non-independent.

Last week’s departure of Mr Connolly effectively facilitated Mr Buckley’s departure, while keeping INM in line with corporate governance codes. The rules say the number of independent directors (excluding the chair) must constitute at least half the board.

“I’d like to express my appreciation to Terry for the independent perspective and significant commitment he brought to the role,” said Mr MacLennan.