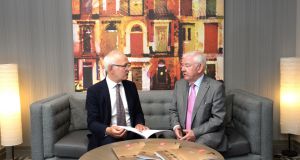 The unaccountability of social media companies is a specific threat to press freedom in the State, the chairman of the Press Council has said.

Speaking at the launch of the annual report of the Office of the Press Ombudsman, Seán Donlon said it was essential that governments and the EU addressed the unaccountable power of tech giants with vast social media platforms, such as Facebook and Google, and introduce comparable regulation to that experienced by other media.

He said it was “becoming clear” in recent election and referendum campaigns in the State and elsewhere that “a lot of campaigning” was taking place on “entirely unregulated and opaque” social media.

“I don’t see in the immediate future that the social media companies themselves are going to take action. They might be encouraged to take action, however, if they realise that governments were going to move at an international level to deal with the problem.”

The Office of the Press Ombudsman received 330 complaints in 2017, up from 261 in the previous year. The ombudsman, Peter Feeney, made decisions on 21 of these complaints, upholding five and not upholding 15, while one complaint was resolved following action by the publication.

The number of upheld complaints fell from nine in the previous year and 10 in 2015.

“Arguably that shows our journalistic standards are being maintained,” Mr Feeney said.

An alleged breach of “truth and accuracy” was the most common reason for making a complaint. Mr Feeney said this was inevitable as people will dispute facts, but also because of the difficulties journalists face in checking facts under the pressure of deadlines.

A breach of privacy was the next most common reason. However Mr Feeney said “very few” privacy complaints were upheld, as a public interest justification is available to the press.

Mr Feeney’s office last year issued eight advisory notices ahead of particular events – such as funerals, inquests, or cases involving children – simply to share the concerns of participants. No complaints were subsequently generated by press coverage of those events.

In 2017, some 147 of the complaints received were outside his remit, while 112 were not pursued beyond the complainant’s initial contact, according to the annual report of the Press Council of Ireland and the ombudsman’s office.

Some 31 of the 330 complaints were resolved by the editor of the publication to the satisfaction of the complainant before the ombudsman ruled, while four complaints were withdrawn following the editor’s response.

Consideration on 12 complaints has been postponed because the matter is subject to ongoing court proceedings and three complaints were still going through the process as of the end of 2017.

The ombudsman said he believed the very presence of the Press Council helped maintain editorial standards. Its complaints handling service is not designed “to punish journalists or shame publications, but rather to encourage quality journalism and give the public confidence in the accuracy of what they read”.

National and local newspapers, magazines, student publications and online-only news publications may be members of the Press Council, and Mr Feeney welcomed an increase in the latter, saying this reflected “a certain shift” in the media.