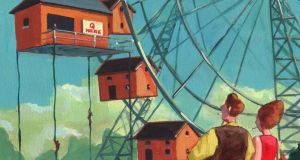 The head of intermediary sales management at Permanent TSB told brokers on Thursday that cashback might not be available for mortgages approved after June 30th, the Sunday Times says

Mortgage brokers have been told to prepare for a likely withdrawal of cashback incentives later this year amid mounting concerns that the offers are misleading homeowners about the true cost of borrowing, the Sunday Times says.

Declan Fitzpatrick, the head of intermediary sales management at Permanent TSB, told brokers on Thursday that cashback might not be available for mortgages approved after June 30th, the paper says. Cashback is a key competitive tool for Permanent TSB, Bank of Ireland and EBS, allowing them to attract customers by offering substantial rewards at a time when they are strapped for cash after buying a home.

Michael O’Leary could make a profit of almost €100 million on a new batch of Ryanair share options if the chief executive can double the airline’s profits or increase its share price to €21 over the next five years, a report in the Sunday Times says. “The terms of the options will require him to double Ryanair’s profitability to €2 billion [a year] and/or increase the share price to €21 per share over the next five years to qualify for all these options,” the airline said.

On Monday, Ryanair announced a shake-up of its business, which involves the airline changing to a group structure that will hold four subsidiaries. O’Leary will be the chief executive of the group after agreeing a new five-year contract to stay with the airline until July 2024.

Businessman Philip Reynolds, son of former taoiseach Albert Reynolds, has sold down his last remaining 15 per cent stake in the family business, C&D Foods, to beef baron Larry Goodman, according to a report in the Sunday Independent. He told the paper that Brexit had been the trigger for this exit from the company – he is also leaving the company after almost three decades as chief executive.

An ex-employee of the O’Flynn property group, who is being sued for allegedly diverting a €60 million property deal away from the group for his own benefit, was paid almost 1 million between 2012 and 2015 to source investment deals for O’Flynn, the Sunday Times reports. Patrick Cox, a son of former MEP Pat Cox, was a senior executive at O’Flynn companies from 2010, but left in 2015 and founded Carrowmore, a property investment group.

In High Court proceedings, the O’Flynn companies allege Cox personally “actively pursued” the development of a 500-bed student accommodation development at Gardiner Street in Dublin from early 2014 and was aware of another project in Smithfield in 2013.