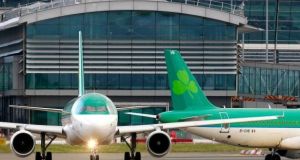 Aer Lingus: has secured a three-year loan of €150 million from the Ireland Strategic Investment Fund.

Aer Lingus has secured €150 million from the State-backed Ireland Strategic Investment Fund’s (Isif) pandemic recovery scheme, according to the Sunday Independent. The three-year loan will be used to strengthen the airline’s liquidity position as it seeks to deal with the impact of the Covid crisis. Isif, which operates under the umbrella of the National Treasury Management Agency, said the loan was agreed on commercial terms.

Rival airline Ryanair has been critical of State supports availed of by competitors across Europe.

FBD is looking to offload the majority of the cost of publicans’ pandemic losses to its reinsurers, according to the Sunday Times Irish edition. As much as 80 per cent of the bill arising from a test case taken by four pubs is potentially reinsured. FBD is talking with reinsurers following Friday’s ruling by the High Court that it must compensate publicans for trading losses arising from Covid-19 lockdowns.

Meanwhile, the Business Post reported that Tánaiste and Minister for Business Leo Varadkar has warned insurers that the Central Bank of Ireland may intervene to ensure firms get the payouts they are entitled to following the High Court ruling.

The Sunday Times reports that Ulster Bank’s potential exit from the Irish market could lead to other banks being swamped with more than €20 billion of savings as customers make alternative banking arrangements. Ulster Bank claims to have a 10 per cent share of retail savings and current account balances. Other banks may be reluctant to take them on as they are less important than business accounts. Its UK parent group, NatWest, is reviewing its options for Ulster Bank’s operation in the Republic, with a full exit of the market possible.

DP Energy, a Cork renewable energy developer, has sold a majority stake in its offshore wind power business to Spanish company Iberdrola for an undisclosed sum, the Sunday Times reported. As part of the transaction, Iberdrola will take control of DP’s projects off the coasts of Ireland. These offshore developments, once operational, will generate enough energy to power the equivalent of 2.6 million households.

RTÉ is seeking greater commercial flexibility to compensate for declines in advertising revenues, the Sunday Independent said. Among steps the broadcaster may take is pay-per-view programming and subscription video on demand, according to a submission sent to the Future of Media Commission. RTÉ has said television and radio advertising is being eroded by tech giants.

Storyful, the Irish-founded media-gathering company owned by Rupert Murdoch’s News Corp, has laid off one-third of its staff, according to the Business Post. It comes weeks after accounts showed that accumulated losses at the company rose to €42 million last year. News Corp, which acquired Storyful in an €18 million deal seven years ago, has ploughed close to €40 million into the company in recent years as it expanded from being primarily a news-gathering agency to working to help brands better manage their corporate reputations.