EU can respond with tariffs of its own, claims German ambassador 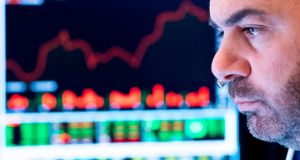 European shares reversed course and edged lower on Wednesday as US president Donald Trump threatened to impose high tariffs on imports of cars from the European Union, pushing car stocks to a three-month low. Speaking at the World Economic Forum in Davos, Switzerland, Mr Trump warned of the tariffs if the EU did not agree to a trade deal. The EU and the US have recently locked horns over issues ranging from a French digital tax to aircraft subsidies. The threat prompted a response from Germany’s ambassador to the US, Emily Haber, that the EU could also impose duties on US products.

The Iseq index rose marginally to 7,170 outperforming many of its European peers. After a bad session on Tuesday, AIB shares rose 3 per cent to €2.73 while Bank of Ireland dipped marginally to €4.55. Hotel group Dalata, which has so far remained mostly insulated from the vagaries of Brexit, rose 4 per cent to €4.85 following a comparable fall the day before. Insulation maker Kingspan, which has traded strongly in recent days, rose by almost 1 per cent to €57.20. Ryanair traded flat at €15.53 despite concerns about the European travel sector. As housing takes centre stage in the election, shares in property reits Ires and Hibernia increased by 3.8 per cent and 1.3 per cent respectively.

London’s FTSE 100 recorded its longest losing streak since early December as a strengthening in sterling, triggered by strong manufacturing sentiment, data weighed on dollar earners, while travel group TUI slid on more Boeing woes. The main index reversed earlier gains to decline 0.5 per cent on its third consecutive day in the red. Homebuilder Berkeley limited losses on the index, jumping 5.4 per cent to a record high after plans to return £450 million to shareholders. An index of housebuilders scaled over a two-year high on the news. The FTSE 250 added 0.1 per cent, buoyed by a stronger local currency. Sterling scaling a five-week high against the euro came as bets of a cut to the UK interest rate declined after the Confederation of British Industry reported a pick-up in manufacturers’ sentiment. That dragged on bluechip exporters including GlaxoSmithKline, HSBC and British American Tobacco. A standout faller was TUI, whose London-listed shares slipped nearly 6 per cent to their lowest since September after Boeing warned of further delay in returning its grounded 737 Max airliner to service.

The pan-European Stoxx 600 index was 0.1 per cent down, having touched a record high of 424.94 earlier in the day. Car stocks were the worst performing sector, dropping more than 1 per cent to their lowest since mid-October. The tariffs threaten to increase pressure on a sector that has already been grappling with a fall in global demand. Finnish tyre maker Nokian Tyres and German car maker Daimler were the top losers on the auto subindex. Losses in the Stoxx 600 were somewhat tempered by anticipation of a European Central Bank meeting on Thursday, while news of Chinese measures to contain a new virus also lent some support.

Frankfurt’s Dax fell 0.3 per cent, having touched a record high earlier in the day following a survey on Tuesday that showed a US-China trade truce had lifted German investor morale to its highest since 2015. German agrigoods maker K&S AG was the worst performer on the Stoxx 600 after Bank of America resumed coverage of the stock with an “underperform” rating. On the other hand, Norway’s Gjensidige was the best performer on the Stoxx 600, ending at a record high after the insurer posted better-than-expected fourth-quarter earnings and set an extra dividend on top of its normal payout to shareholders.

Wall Street rebounded on Wednesday as a healthy forecast from IBM enticed buyers back to the equity market while investors kept a wary eye on the developing coronavirus outbreak. Tech shares led all three major US stock averages into the black, with the S&P 500 and the Nasdaq setting a course to notch new record closing highs, the day after virus fears prompted a sell-off. Optimism was boosted by IBM (International Business Machines), which posted surprise quarterly revenue growth and forecast higher-than-expected full-year profit. Its shares were up 3.2 per cent, and provided the biggest lift to the blue-chip Dow. Chipmakers rose following a strong forecast from Dutch semiconductor equipment maker ASML Holding. The Philadelphia SE Semiconductor index was up 1 per cent. Tesla extended its rally, rising 6.1 per cent and becoming the first publicly listed US automaker to cross the $100 billion market valuation mark. – Additional reporting: Reuters