Markets report: C&C falls 4.5 per cent after it announces departure of chief executive 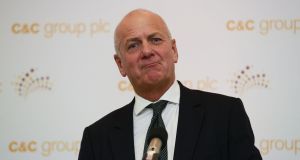 C&C fell 4.5 per cent after it unexpectedly announced the departure of chief executive Stephen Glancey.

European shares ended slightly higher on Thursday after the signing of a preliminary US-China trade deal removed a degree of near-term uncertainty, although disappointing earnings dragged down London shares.

Investors digested news that China will boost purchases of US goods and services in exchange for the rolling back of some tariffs under a preliminary trade accord, but were cautious as the deal does not fully eliminate the tariffs.

The Iseq nudged down 0.2 per cent, amid mixed fortunes for its key stocks. Ryanair advanced 1 per cent to €15.72, recovering part of its loss in the previous session, while index heavyweight CRH was flat at €34.59.

Cairn Homes remained in upbeat mode, rising 2 per cent to just below €1.33, after a trading update in which it said it completed 1,080 units in 2019, up 34 per cent, and expanded a share buyback programme.

However, packaging group Smurfit Kappa finished 2.5 per cent lower at €32.32, and the banks had a lacklustre day with Bank of Ireland closing 0.4 per cent lower at €4.63 and AIB down 3.5 per cent at €2.90, compounding ground lost in Wednesday’s session when analysts in Barclays downgraded the stock.

Dalata Hotel Group was another faller, ending 2.2 per cent lower at €4.97.

Underwhelming trading updates from Pearson and Whitbread broke a three-day winning run for London’s main index, with the FTSE 100 ending 0.44 per cent lower.

Education company Pearson sank 9 per cent to the bottom of the FTSE 100 and hit its lowest level since October 2008 after saying earnings would be lower due to sharp declines in US higher education sales.

Premier Inn owner Whitbread fell 5.1 per cent after it reported lower UK like-for-like sales, and warned that clarity on Brexit following a decisive British election outcome had yet to deliver a bounce in business bookings.

Associated British Foods outperformed the FTSE 100, rising 4.1 per cent as solid revenue growth over Christmas at its Primark fashion chain, which trades in the Republic as Penneys, helped it stand by its annual earnings forecast.

Irish drinks company C&C, which is listed in London, fell 4.5 per cent on a day in which it unexpectedly announced the departure of chief executive Stephen Glancey.

The pan-European Stoxx 600 added 0.2 per cent. In France, the Cac 40 added 0.1 per cent, while the German Dax slipped marginally. Spain’s Ibex 35 was an outperformer, rising 0.6 per cent.

European utility stocks touched their highest levels since late-2008 on strength in German power generator RWE. Shares of the company rose amid reports that the German government plans to compensate RWE with about €2.6 billion for costs related to the country’s planned exit from coal.

The S&P 500 crossed the 3,300 mark for the first time and other stock indexes hit record highs on Thursday, as encouraging retail sales data and upbeat Morgan Stanley earnings fuelled a rally following the signing of an initial US-China trade deal. The Wall Street bank jumped 7.6 per cent to the top of the S&P 500 in early trading after it beat quarterly profit estimates.

Microsoft rose 1 per cent and chipmakers gained after a strong forecast from the world’s top contract chipmaker TSMC.

Bank of New York Mellon Corp slipped to the bottom of S&P 500, down 7.8 per cent, after it missed profit estimates. – Additional reporting: Reuters.