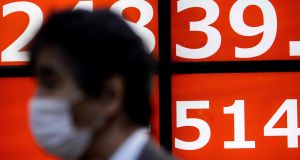 Asian equities hit a record high on Monday as investors set aside fears about rising coronavirus cases and bought stocks, cheered by data showing a robust recovery in China and Japan. MSCI’s broadest index of Asia-Pacific shares outside Japan gained 1.1 per cent to hit its highest since its launch in 1987, with markets across the region making milestone peaks.

Japan’s Nikkei rose 2 per cent to a 29-year high. South Korea’s Kospi hit its highest since early 2018 and Australia’s ASX 200 hit an eight-month top, before jamming there when a glitch halted trade. S&P 500 futures rose 0.9 per cent, Nasdaq 100 futures leapt 1 per cent and European futures were up strongly with EuroSTOXX 50 futures up 0.9 per cent and FTSE futures up 0.6 per cent late in the Asia session.

“There’s just mountains of cash sitting on the sidelines, waiting to be put to work,” said Kyle Rodda, analyst at IG Markets in Melbourne. “And since we’ve got this vaccine news, as well as diminished risk around the US elections, all of this is flying into equities ... everyone’s thinking now that it’s the cue to get in.”

Currency, bond and commodity markets were a little more circumspect, but the dollar slipped against trade-exposed currencies and oil bounced off Friday’s lows. Japanese economic growth, which beat records and forecasts to pull the world’s third-largest economy out of recession and better-than-expected industrial output in China added to the enthusiastic mood.

“Rising COVID-19 cases are a risk, but keep the faith,” Morgan Stanley strategists said in their 2021 outlook note. “We think this global recovery is sustainable, synchronous and supported by policy, following much of the ‘normal’ post-recession playbook. Overweight equities and credit against cash and government bonds, and sell dollars.”

The announcement, a week ago, that Pfizer had developed a very effective vaccine has investors hoping for similar good news soon from rival Moderna and looking past a tough winter to a better spring and summer ahead. Beaten-up benchmarks in Thailand and Singapore have gained more than 5 per cent since the news, with a regional trade deal sealed over the weekend further supporting the mood.

“A Northern hemisphere slowdown will inevitably appear ... probably prompting more easing by the Federal Reserve and the European Central Bank, ” said OANDA analyst Jeffrey Halley. “But Asia, comfortably orbiting China’s event horizon, seems to be moving closer to escape velocity of its own accord.”

Besides the virus, Brexit trade talks are chief among European investors’ concerns on Monday and hopes for a breakthrough have supported sterling against the dollar and the euro. The departure of hardline adviser Dominic Cummings from Downing Street is seen as a positive, perhaps allowing more British concessions, but chief negotiator David Frost said on Twitter that talks “may not succeed”.

Elsewhere the Aussie and kiwi made small gains, much of which they handed back late in the Asian day. The next move for the Australian dollar may depend on a clutch of data and speeches this week, beginning with central bank governor Philip Lowe.

Bonds, which had sold off strongly on vaccine news last week, were steady with where they left off on Friday, with the yield on benchmark US 10-year debt at 0.8930 per cent, down from last week’s high above 0.97 per cent.