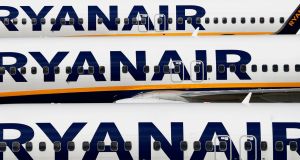 Shares in Ryanair climbed 3% in Dublin. Photograph: AFP via Getty

European equity markets ended lower on Thursday, with resource stocks suffering the most, while an aggressive growth strategy from the US Federal Reserve was met with little fanfare locally.

The Iseq followed other indices into negative territory, closing down 0.6 per cent at 6536.85.

Paddy Power parent Flutter closed unchanged after reporting a 70 per cent fall in first-half profits due to Covid-19.

Also reporting on Thursday was Irish Continental Group, which jumped 2.75 per cent after recording a €11.2 million first-half loss.

Market heavyweight CRH was one of the main fallers in Dublin, down 2.6 per cent.

Banks were also lower, with Bank of Ireland losing 0.6 per cent and AIB falling by 2.2 per cent.

Other movers included Ryanair, up 3 per cent, and Smurfit Kappa, which closed down 2 per cent.

London stocks ended Thursday on the back foot as earning updates from names including Rolls-Royce underlined the extent of corporate damage inflicted by the coronavirus pandemic, while Federal Reserve chief Jerome Powell’s speech brought few surprises.

The blue-chip FTSE 100 fell 0.8 per cent, with banks, mining companies and energy stocks leading the declines.

Rolls-Royce slipped 1.2 per cent to a more than three-week low after sinking to a first-half underlying loss before tax of £3.2 billion. The wider aero and defence index lost 0.4 per cent.

The mid-cap FTSE 250 edged 0.1 per cent lower, but most of its declines were contained as specialist mortgage lender OneSavings Bank surged 15.7 per cent on reporting a 2 per cent rise in its underlying net loan book.

Hays, one of the world’s biggest recruitment agencies, fell 0.4 per cent as it posted a 12 per cent fall in annual net fees, while advertising company WPP rose 6.5 per cent as it resumed its dividend after beating dire forecasts for second-quarter trading.

Irish-founded Grafton Group was up nearly 4 per cent after reporting first-half results.

The pan-European Stoxx 600 index closed down 0.6 per cent, with mining stocks ranking among the biggest percentage losers as raw material prices retreated. European stocks also lagged their peers in the US, with Wall Street indexes touching new highs after the Fed announcement.

European shares have yet to recover entirely from lows hit during the pandemic, unlike Wall Street.

French conglomerate Bouygues rose 1.3 per cent after reporting a lower-than-expected core operating loss in the first half of the year.

Clinical diagnostics company Novacyt jumped 7 per cent after it launched a test to differentiate between Covid-19 and common winter diseases.

The S&P 500 and the Nasdaq rose to record highs on Thursday as the Federal Reserve said it sought to achieve inflation averaging 2 per cent over time in an attempt to lift the US economy out of a deep recession.

Walmart was up 6 per cent after the retailer said it was joining Microsoft in a bid for social media company TikTok’s US assets.

Boeing rose 3.1 per cent after the European Union Aviation Safety Agency announced plans to begin flight tests of its 737 Max plane, a move viewed as a key milestone toward its return to service.

Abbott Laboratories surged 6.6 per cent after the medical device-maker won US marketing authorisation for a $5 rapid Covid-19 portable antigen test.

Cosmetics maker Coty shed 5.5 per cent after posting a bigger-than-expected quarterly loss as demand for its beauty products took a hit from the closure of stores and parlours. –Additional reporting: Reuters